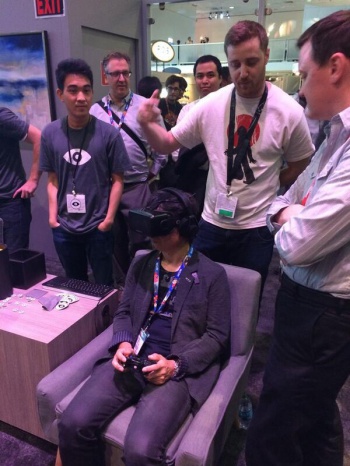 Nintendo’s Shigeru Miyamoto has a little bit of uneasiness with whether or not strapping big goggles to your face is the best way for people to play video games.

Earlier in the week, we heard from Nintendo of America president Reggie Fils-Amie about how Virtual Reality isn’t quite there yet, but that Nintendo would be on board when it is. In that story, we mentioned that legendary Nintendo developer Shigeru Miyamoto gave the Oculus Rift a whirl at E3, and now, we have the master’s thoughts on it.

Essentially, Miyamoto believes that the kind of gaming experience the Rift offers is “in direct contrast with what it is we’re trying to achieve with Wii U.” He told Time Magazine that “When you think about what virtual reality is, which is one person putting on some goggles and playing by themselves kind of over in a corner, or maybe they go into a separate room and they spend all their time alone playing in that virtual reality.”

You can see how the “sitting by yourself in a corner” concept would go against all of those “happy family playing Wii together” stock images. Miyamoto added that he has a little bit of uneasiness with whether or not Oculus Rift-style Virtual Reality is the best way for people to play video games.

He did say that Nintendo still had an interest in and was experimenting with the technology, but just not in the same way the Oculus Rift is turning out to be. “The 3DS was designed with a little bit of [VR tech] in mind with its stereoscopic 3D. So we’re always looking at hardware and assessing what’s possible,” he said.

Zelda Director Vows to Cut Down on Tutorials