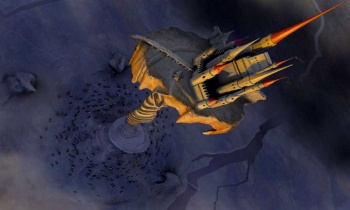 You saw the leak of concept art for what appears to be Deus Ex creator Warren Spector’s project for Disney, now hear what the rumor mill is saying Epic Mickey might play like.

Earlier this week when concept art surfaced for what most everyone is pretty convinced is Warren Spector’s long-in-the-works project at Junction Point for Disney, we put it pretty plainly when we said it looked “awesome. Really, really awesome.”

Well, elegantly surreal art is one thing, but awesomeness in a game can’t thrive on nice paintings alone. Will Epic Mickey play as well as its concept art looks? Judging from some rumored info via CVG, I’m hopeful.

Here’s what a source told the site: Epic Mickey is a Wii-exclusive game where you “paint your way through levels” with, duh, the Wii Remote. It’s not just painting though – you also draw, etch and even erase parts of levels as you go on your merry way. Sounds like some meta-tastic crossover of Okami and Looney Tunes classic “Duck Amuck.”

There’s also some info on the story as well. Apparently it’s going to center on some of the Disney characters that time forgot who are after Mickey for stealing the fame that was rightly their own. Again, sounds very meta and playful in its treatment of the Disney legacy (which is something the art definitely showed as well).

This all sounds fairly convincing, though naturally you never know. We’ve contacted Disney for their take, though we’re not getting our hopes up.