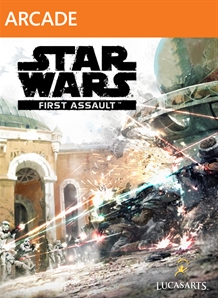 NeoGAF was the first to spot it on the Xbox Live Arcade marketplace: Star Wars First Assault, the title that until now has been a trademark and nothing else. This is an unintentional reveal for LucasArts, which has been unwilling to say much about the title. It even lacks a website; the one it has redirects straight to StarWars.com.

Thanks to this slip we now know it will be an XBLA title, but all else is mystery. There are some troopers blasting away at a couple of dudes failing to take cover, so it could be a shooter … I guess … At least we don’t have reason to think it will be a Kinect title. That’s got to count for something.

“It is an exciting time at our company right now,” said LucasArts in an official statement, when questioned by IGN. “However we don’t have any announcements at this time.” So no release dates, then? ‘Spose not.