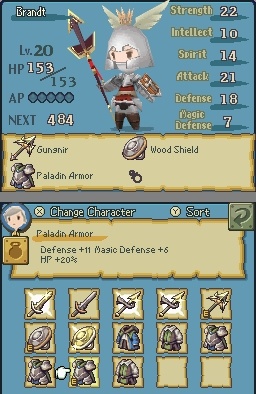 Square Enix’s next Final Fantasy for the DS looks like a return to the traditions the series is known for.

Square Enix has announced that Japan’s Hikari no Yon Senshi: Final Fantasy Gaiden will be coming to European and North American Nintendo DS systems as Final Fantasy: The 4 Heroes of Light. Don’t write this one off as a disappointing Final Fantasy spin-off just yet, as it seems to have more in common with the series’ roots than other recently released titles.

The newly announced game looks somewhat similar to Legend of Zelda: Wind Waker with a cel-shaded, “picture-book” art style. Battles work how Final Fantasy battles “should” work, in a turn-based environment where players save up action points to use more powerful attacks. The job system made famous by Final Fantasy even returns as the “Crown Job System,” which includes 20 jobs and gives each character a different ability set and appearance as their “crown” is changed. Up to four Final Fantasy maniacs can also join together in a multiplayer mode.

All in all, Final Fantasy: The 4 Heroes of Light sounds like a re-imagining of the first Final Fantasy for the NES, which saw the four warriors of light vanquish the world’s elemental fiends, but without being tied to that original game’s storyline or gameplay conventions. For classic Final Fantasy fans, or perhaps those disappointed with Final Fantasy XIII, 4 Heroes of Light looks like a game to at least allow a portion of the brain to anticipate for now.

It’ll be released on October 5 in North America, though the game’s European release date is a vague autumn 2010. The best part: There is no Square Enix tax. 4 Heroes of Light wil be $34.99. Five more dollars to spend on Teenage Mutant Ninja Turtles action figures!