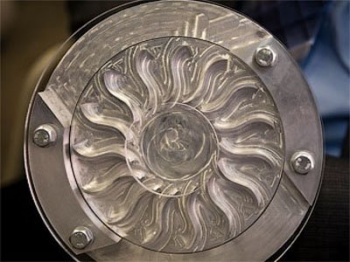 The new engine uses a disc which channels gas and air around to generate electricity, reducing gas consumption by 90 percent.

Norman Muller at Michigan State University may be cheering for his school’s Spartans in the NCAA tournament this week, but I’m way more excited for what his research team has designed. The internal combustion engine that powers most cars and trucks in the world hasn’t changed drastically in 150 years, but the piston-based system wastes almost 85 percent of the energy. Muller’s innovative disk of metal has carefully ground channels that funnel gas and air so that the disk spins with minimal waste. Using the shockwave engine to power an electrical generator in hybrid vehicles would replace many of the components of automobiles like the radiator, valves and camshaft, reducing the vehicles weight by almost 20 percent. Muller showed off his shockwave engine last week to the US Department of Energy.

“It’s a new engine,” Muller said. “It uses shockwaves to transmit energy from the expansion and compression [of gas] significantly reducing production costs and weight.”

The design is simple once you wrap your brain around the concept. A gas-air mixture enters the center of the disc and as the rotor turns, the mixture is compressed because the channels are blocked. A spark ignites the gas, sending shockwaves of energy inwards which turns the rotor and starts the process over again. The turning disk powers a generator, allowing much less gas to be used to create

I’m not a mechanical engineer, but I suppose it’s possible that a drive shaft could also be attached to this engine to eventually transfer the energy to the wheels of a car. What’s not clear is whether this shockwave engine will produce enough torque to start a heavy car moving from 0 mph, but hopefully the reduced weight of the vehicle would make that possible.

Maybe it’s just because gas is almost $4 a gallon, but Muller’s design is pretty exciting. Listen up, Detroit. Let’s get this baby into production. Stat.

Thanks to CoverYourHead for the tip.