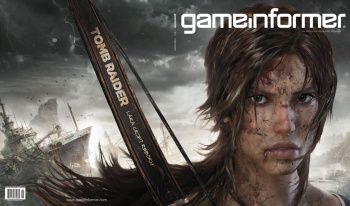 What is Crystal Dynamics changing for the new and improved Tomb Raider? An awful lot, it turns out.

The latest issue of Game Informer has given us a glimpse into what to expect from the new Tomb Raider. The reboot of the franchise – which is said to be a reboot of the whole franchise, not just the games – was formally revealed earlier this week.

Story-wise, the new Lara is 21, and is eager to prove herself after leaving university. She signs up with Conrad Roth, a former British marine who now captains a salvage ship, and goes off in search of treasure on an island near Japan. The ship is torn apart by a terrible storm, and Lara is knocked unconscious. When she wakes, she finds herself tied up upside-down in front of a strange altar and has to burn her restraints – and herself – in order to escape. These exertions, and others besides, will take their toll on Lara, who will quickly find herself caked in grime and blood – quite a lot of it her own.

Crystal Dynamics has gone back to the drawing board when designing its new Lara. Certain elements of the old Lara had been retained, like her ponytail or the shape of her lips, but her improbable curves and enormous chest are gone. Her wardrobe too, has received an update, consisting of sturdy boots, cargo pants, and layered tanks tops – in other words, attire more suited to exploration than tight shirts and hot pants. Brian Horton, Crystal Dynamics’ senior art director, says that the new Lara will still be attractive, but that the reboot wouldn’t play up sexuality for its own sake. A lot of the new Lara’s sex appeal, he says, will come from the mixture of toughness and vulnerability that Crystal Dynamics was infusing the character with.

The gameplay is getting tweaked, too, with the linear progression of previous games ditched in favor of a “Metroidvania” style of play, where new equipment allows Lara to explore more of the island. There will be a survival mechanic, although experience director Noah Hughes says that the game won’t be dipping into simulation territory. The game will also have base camps, where players can upgrade Lara’s skills and tinker with salvaged equipment to make new gear. Players will be able to fast travel between base camps, which Crystal Dynamics says will minimize the amount of backtracking required.

The reboot will see Lara lose her trademark twin pistols, in favor of scavenged weaponry. While Crystal Dynamics are tight lipped about the actual weapons, concept art shows her with a bow, a pistol a climbing axe, and what could be a shotgun. The lock-on system is also gone, with a free aim combat system taking its place. Brand director Karl Stewart says that combat will be a matter of survival for Lara, and while she’ll be capable of handling anything that comes at her, she’s won’t necessarily be prepared for it psychologically.

I have to admit, the new Tomb Raider sounds like a lot of fun. Whether it will actually end up being fun is anyone’s guess, but there’s plenty there to be cautiously optimistic about. You can find out more from the December issue of Game Informer, which will be available later this month.