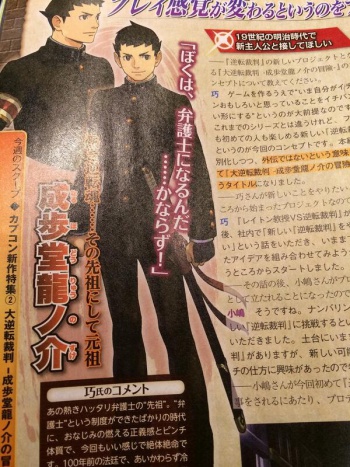 Ace Attorney director Shu Takumi is back and intends to take the series to Japan’s Meiji Era.

Scans from the upcoming issue of Famitsu tease the next Ace Attorney game. The leaked picture shows a young man as a new character with a sword at his hip. The game reportedly takes place in Japan’s Meiji Era.

Ace Attorney director was not involved with the most recent title, Ace Attorney: Dual Destinies, but he’s returning for the next game, tentatively titled Dai Gyakuten Saiban – Naruhodou Ryuunosuke (Grand Turnabout Trial – The Adventures of Naruhodou Ryuunosuke) for the 3DS. The title was vaguely teased in an earlier Japanese Nintendo Direct when Takumi indicated this game will move in a completely different direction.

Capcom may have a difficult time with the localization should it bring the title to North America and Europe. The company has changed some things for localization in the past, but with the next entry firmly taking place in a historical period that many Westerners do not study, Capcom may have some difficulties ahead should the game be released in the West.

Famitsu will have more details about the game, as well as an interview with Takumi. There’s little to go on now, but with the character’s spiky hair, he could be related somehow to Ace Attorney‘s Phoenix Wright. Or maybe the team just really likes spiky haired protagonists.

Venetians Try To Save ‘Scariest Place On Earth’ From Developers