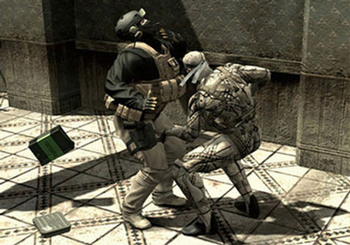 Nicalis founder, Tyrone Rodriguez, talks about Hideo Kojima and the “indie” label. It turns out he doesn’t particularly care for either of them.

Founded by former IGN editor, Tyrone Rodriguez, Nicalis is a small developer known mostly for its ports of popular indie games, Cave Story and VVVVVV. The company also developed and published NightSky, a charming physics-based puzzle/platformer with an attractive aesthetic. Oh, and it has what is pretty much the coolest website I’ve ever seen.

During an interview with IndieGames.com, Rodriguez was asked if the recent criticism leveled at modern Japanese games by entirely likable and not-smug-at-all indie developers, Jonathan Blow and Phil Fish – who I shall now collectively refer to as BlowFish, witty and original wordsmith that I am – was justified. Rodriguez couldn’t name any Japanese indie games, save Cave Story, that weren’t bowel-shatteringly awful, but he did name drop a few mainstream titles; Demon’s Souls, Street Fighter IV and The World Ends with you, to name a few. Then the name “Konami” came up, and all of a sudden Rodriguez was on the war path.

The following was written by IndieGames editor, John Polson:

And then I mentioned Konami. “Konami doesn’t make good stuff,” he argued. He says in particular that Metal Gear Solid developer Hideo Kojima should stop making games and start making bad movies (ironically, Kojima just might). “He’s terrible at making games. Metal Gear is good in spite of him. I haven’t enjoyed a game of his since maybe the original Metal Gear Solid, maybe.” He feels the recent ones are tedious, riddled with bad writing, bad story-telling, and bad control.

Having exposed Konami and Kojima to the full extent of his fury, Rodriguez turned his attention to indie game developers.