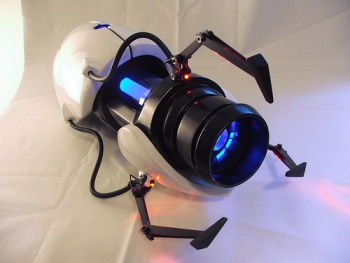 A Portal fan asked her boyfriend to make a Portal gun for her Aperture Science test subject costume. What she got back is one of the most absurdly well-crafted cosplay accessories ever made.

Cosplay, at least as far as I see it, comes in but two varities: the horrifically bad and the absolutely stunning. This Portal Gun (or Aperture Science Handheld Portal Device if you want to be a nerd about it) most certainly belongs to the latter category.

Crafted by Cosplay.com user Volpin at the request his girlfriend, Flickr user emilyskeith, for a Portal-themed cosplay, the gun not only looks exactly like the in-game model, but has all sorts of added touches that give it that extra bit of believability, like multiple blue and orange LED lights that turn on and off when the gun is in different modes, an Aperture Science barcode and even artificial bumps and scratches to give it that “been around the lab more than once” look. The gun is powered by a nine-volt battery, according to Volpin.

To say that blood, sweat and tears went into this might be more true than you’d think. “I wanted him to put some blood on it, ’cause let’s face it, I’m not careful enough to avoid those feisty turrets,” emilyskeith wrote. “Also, I’m putting a ‘wound’ tear into the sleeve of my right arm to look as if I’d been grazed by a bullet, and I thought the splatter would be a nice touch.” Because it’s all about the details.

“He did an AMAZING job, though,” emilyskeith said. “It’s really uncanny how close it is to the game images. And I’m not biased or anything.”