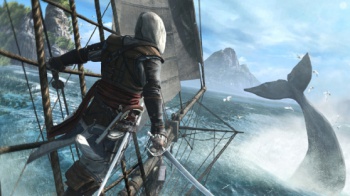 It’s getting harder and harder to take PETA seriously anymore.

People for the Ethical Treatment of Animals is angry at a videogame’s depiction of “animal cruelty.” It has pointed its self-righteous finger of blame at videogames before, when it protested World of Warcraft‘s “seal clubbing,” Cooking Mama‘s lack of a vegetarian menu, and, perhaps most bizarrely, Super Mario 3D Land‘s apparent support of the fur industry. This time its disgust is focused on the latest installment of Ubisoft’s Assassin’s Creed franchise, for the revelation that the latest game, Black Flag, will feature whaling in some form.

“Whaling-that is, shooting whales with harpoons and leaving them to struggle for an hour or more before they die or are hacked apart while they are still alive-may seem like something out of the history books, but this bloody industry still goes on today in the face of international condemnation, and it’s disgraceful for any game to glorify it. PETA encourages video game companies to create games that celebrate animals-not games that promote hurting and killing them.”

It should be noted that very little is known of the role whaling will play in the game at this stage. It could possibly be an entirely optional minigame, it could only exist in a cutscene, or it could be an activity that only ‘the bad guys’ engage in. Nothing is really known other than whaling will be in the game in some form, as illustrated by the above screenshot.

Whaling is not something we have seen very often in videogames before. Assassin’s Creed IV is a period piece, and in the time period it is set, it makes perfect sense for the characters to be engaged in whaling. There are dozens historic movies and books that depict whaling, such as the classic Moby Dick. Furthermore, Dishonored, a stealth-action FPS released last year, featured whale oil as the main resource of the game, yet was able to avoid the ire of PETA.

Whaling is a very sensitive subject at the moment. A blanket ban on commercial whaling has been in effect since 1986, yet several countries, most notably Japan and Norway, still continue to hunt whales under a scientific research loophole.