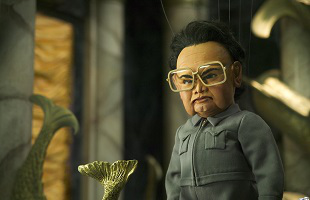 America, fuck NO! Kim Jong-il finally gets his revenge.

In case you have been living under the proverbial rock this week, Sony Pictures decided to shelve The Interview entirely and indefinitely yesterday. The move came after the five biggest theater chains in the U.S. said they wouldn’t show the film when it premiered next week, after the hackers responsible for breaking into Sony started making physical threats of violence.

The cancellation of The Interview distribution left a bit of a holiday movie vacuum for many theaters — particularly those who aren’t part of a large national chain. The solution? Take freedom by the horns, and screen the 2004 classic Team America: World Police instead. The Alamo Drafthouse, among other theaters, was all set to show Team America in its halls come next week.

Except that they won’t, now, as Paramount has ordered all planned screenings of Team America to be cancelled.

“Due to to circumstances beyond our control, the TEAM AMERICA 12/27 screening has been cancelled,” said the Alamo Drafthouse Twitter account in a follow-up. “We apologize & will provide refunds today.”

The Plaza Theater in Altanta, Georgia confirmed that the order to cancel Team America screenings came from Paramount directly, as did the Capitol Theatre in Cleveland.

We have yet to see an official statement from Paramount on the cancellations, but we will update if one is published.