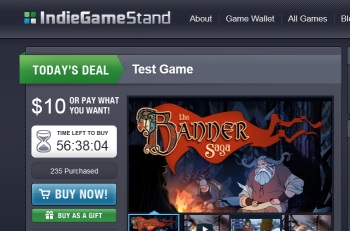 The IndieGameStand will offer “pay what you want” sales on indie games all day, every day, all the time.

The “pay-what-you-want” deals popularized by the Humble Bundle, Indie Gala and other such game collections are sweet offers indeed. Gamers get to pay whatever price they like for their fun (sometimes there’s a minimum, sometimes not) and while cheapskates are inevitable, piles of money are consistently made. The only downside is that these deals come and go fairly quickly, so if the urge for a new indie game strikes during the “gone” phase, you’re out of luck.

The IndieGameStand aims to change that situation by offering pay-what-you-want sales all the time. Every four days, a new indie game will be offered to gamers at whatever price they choose to pay, with ten percent of each sale going to a charity of the developer’s choice. All games will be DRM-free and downloadable on demand, and those that are eligible will also come with Steam and Desura keys.

Even after a game’s four-day sales window has expired, IndieGameStand will maintain information about the game, including links to the developer’s website and other digital distributors who carry it on a regular basis. It will also host alpha and beta builds of games in development, provided indie studios a ready-made channel for pre-release testing.

The site is currently accepting submissions from developers interested in having their games featured on the site; more than 50 indies have already signed up. IndieGameStand goes live on September 26, but anyone who creates an account prior to launch will be given a free copy of the “amazing platformer” Chester. I’ve never heard of it, but free is free, and even without the giveaway this sounds like something worth keeping an eye on. Give it a look at indiegamestand.com.