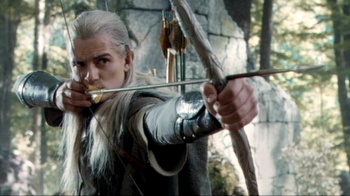 Orlando Bloom’s Legolas from Lord of the Rings has been confirmed for Peter Jackson’s upcoming Hobbit film.

Orlando Bloom’s portrayal of Legolas in Peter Jackson’s Lord of the Rings films had fans scrambling to buy their own light leather armor and learn how to use a bow and arrow. In a move sure to anger the most hardcore of J. R. R. Tolkien’s followers, the golden haired member of the Fellowship will return in Jackson’s first Hobbit film.

Jackson shared the reveal on his Facebook page. “Ten years ago, Orlando Bloom created an iconic character with his portrayal of Legolas,” he wrote. “I’m excited to announce today that we’ll be revisiting Middle Earth with him once more. I’m thrilled to be working with Orlando again. Funny thing is, I look older-and he doesn’t! I guess that’s why he makes such a wonderful elf.”

Great, right? Not for everyone. Legolas doesn’t actually appear in the Hobbit book, prompting some responses on Jackson’s Facebook page such as: “But Legolas wasn’t even mentioned in the book, only his father was and even then the name wasn’t used.”

Exactly how Jackson will incorporate Legolas isn’t yet known. Jackson is presumably creating some kind of bridge between The Hobbit and Lord of the Rings, though The Hobbit takes place 60 years before the Lord of the Rings trilogy (edit: or just giving Legolas a cameo).

Bloom joins other Lord of the Rings cast members such as Elijah Wood as Frodo Baggins, Andy Serkis as Gollum, and Ian McKellen as Gandalf. The first Hobbit film of two is shooting now and scheduled for release in 2012.