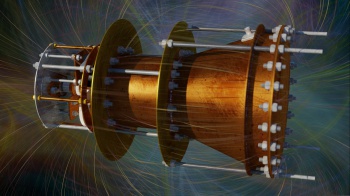 NASA has conducted experiments on a revolutionary space drive that seems to defy the laws of conservation of momentum and confirmed that it works.

Developed by scientist Roger Shawyer, EmDrive is a spacecraft propulsion system that allegedly creates thrust without a propellant by using electricity to direct microwaves inside a specially-designed container. If proven to be possible, such an engine would revolutionize the way we design spacecraft by eliminating the need for the huge fuel supplies that currently consist of half the launch mass of most satellites.

But here’s the problem: the EmDrive seems to violate the law of conservation of momentum. A rocket accelerates forward when the fuel inside of it is shot out backwards. Momentum, a measure of mass and velocity, is exchanged between the rocket and the fuel. But where does the EmDrive’s momentum come from? There are three possibilities: either the EmDrive doesn’t do what its creator claims, it somehow doesn’t break the law of conservation of momentum, or our fundamental understanding of classical physics is completely wrong.

Shawyer came under a lot of criticism in 2006 for his seemingly wild claims about the results of his demonstration systems. So an independent, peer-reviewed Chinese team built its own EmDrive and confirmed that it worked in papers published in 2008, 2010, and 2012. But that wasn’t enough to convince skeptics, so the cavalry was brought in: NASA.

US scientist Guido Fetta built his own version of the EmDrive, called the Cannae Drive, and convinced NASA to put it to the test. On July 30, 2014, the results of the test were presented at the 50th Joint Propulsion Conference.

NASA confirmed that the drive works.

Five NASA researchers spent six days meticulously preparing the equipment and two days conducting experiments in an attempt to debunk the drive – it has happened in the past that apparent violations of the laws of physics were simply a result of interference between instruments and equipment.

But NASA confirmed that the drive generates thrust – a tiny amount, and much less than the Chinese team reported, but it nonetheless works. How? The NASA team doesn’t offer an explanation in its paper.

As for why the Cannae Drive generates less thrust than the EmDrive, Shawyer believes it is a result of the design of the container in which the microwaves are directed.

Of course, the results of this experiment will come under intense scrutiny. We will have to wait a while longer before we learn whether this truly is a revolutionary drive, or simply a huge gaffe. I have my fingers crossed.

The Cheapest PC I Would Build: August 2014