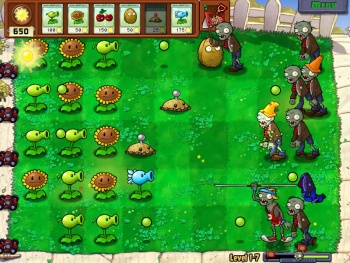 One of the best distractions to use on a prison guard turns out to be PopCap’s Plants vs. Zombies.

A prison break in Cagayan de Oro City, Philippines could have been avoided were it not for casual gaming. Five inmates were reportedly able to escape while a prison guard was busy trying to protect his home from zombies.

In Plants vs. Zombies, that is: A tower defense-style game that tasks players to defend their homes from waves of invading zombies with powerful plant defenders. The inmates said that escaping from the prison wasn’t hard. The guard actually left the keys lying around while he became engrossed in a round of Plants vs. Zombies, which could potentially go on for quite some time if he was doing well enough.

I’m imagining quite the humorous situation, with the inmates tiptoeing behind the guard as he exclaims things such as: “Stop!” The inmates think they’re caught, but he’s only referring to the encroaching zombie attack, and they resume their slow, silent movements to make it out of the prison. That’s how I think it went, anyway.

Four of the inmates were caught soon after the escape, but one still remains at large. It’s said that he was fortunate enough to hide in the back of a garbage truck waiting for him once he made it past all of the prison guard’s plants.

A word of advice to all you aspiring prison guards out there: Don’t leave the cell keys within reach of the inmates. Isn’t that pretty much Prison Guard 101? Once you follow that simple advice, it’d be perfectly fine to forget your troubles while you defeat zombies dressed in disco gear.