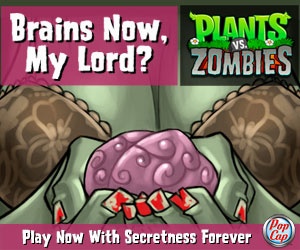 PopCap is far from done with their Plants vs. Zombies ads spoofing the ubiquitous and bosom-filled ads for Evony, and we’ve got your first peek at the new batch right here.

A good joke is worth telling more than once, but a good spoof of a super annoying ad you see literally everywhere on the internet these days? Well that’s worth telling as many times as you damn well please, at least if you’re doing it as well as the masters of satirical ad design at PopCap.

Last week the casual games company earned quite a few guffaws across the web with their Plants vs. Zombies ad spoofing those shameless and boob-filled ads for free MMOG Evony, and now they’re keeping the joke running with a whole series of ads. They’re due to start running later today, but you can check them out here.

So what’s the story behind these ads? Well, as PopCap’s Garth Chouteau tells it, two PopCap employees walked into a bar, had a couple beers, and, naturally, as any beer-fueled discussion should go, the topic became the “glut of ridiculously over-the-top ads showing up on the web touting persistent worlds by showing a lot of virtual cleavage and skin…a beer or two later, they’d designed the first of these ads, and it just snowballed from there.”

“We needed some quirky ads to help keep Plants vs. Zombies top of mind, and following the PvZ ‘music video’ and zombatar and the zombies’ and plants’ takeover of PopCap.com when the game launched, we wanted to do something equally zany – and as gamers ourselves, these spoof ads had us rolling on the floor, so we figured other gamers would appreciate them too,” Chouteau explained.

On behalf of anyone who has ever had to literally use a hand to cover a part of their monitor to avoid seeing one of those ads or appearing like someone who would want to see one of those ads, I can say that we do appreciate them too.