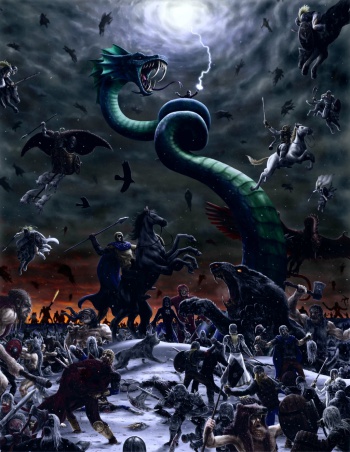 According to Vikings, “Ragnarok,” or The End of the World is happening today, February 22, 2014.

Look around; is the apocalypse happening around you? If not, well, it should, as according to “experts” in Norse mythology from the Jorvik Viking Center, Ragnarok, or the end of the world to us non-Viking folk, will happen on February 22, 2014 — which is, you’ve guessed it — today. This prediction was announced last year with the sound of an ancient horn being heard on the “rooftops of York” in November last year, which is a “portent of doom” and the beginning of a countdown to the Norse apocalypse.

The horn, named Gjallerhorn, belonged to Norse god Heimdallr, and is used to warn people that Ragnarok will be happening in the next 100 days, with the final day being the 22nd of February. According to the legends of Ragnarok, the god Odin will be killed by the wolf Fenrir and the other “creator” gods will fall, before the earth is born anew for its human re-population. Coincidentally, this countdown event is the same day as the grand finale of the 30th JORVIK Viking Festival in the city of York.

Danielle Daglan, director of the JORVIK Viking Festival states, “Ragnarok is the ultimate landmark in Viking mythology, when the gods fall and die, so this really is an event that should not be underestimated…In the last couple of years, we’ve had predictions of the Mayan apocalypse, which passed without incident, and numerous other dates where the end of the world has been pencilled in by seers, fortune tellers and visionaries, but the sound of the horn is possibly the best indicator yet that the Viking version of the end of the world really will happen on 22 February next year.” Do keep in mind that this announcement was made in November last year, so don’t go blame Daglan if the apocalypse isn’t happening in your side of the globe.

Now, seeing as it’s February 23rd where I am, and I’ve yet to be taken to Valhalla, I’m going out on a limb here and say today is not the end of the world. Don’t blame the Vikings, though, even the Mayans and Nostradamus got that one bit wrong, too.

Eco-Tourism May Be Best Hope for Endangered Lemurs