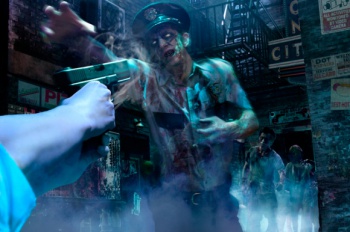 USJ is providing visitors with their own replica gun, a limited supply of ammo, and only a few minutes to survive an onslaught of zombies.

Capcom is teaming up with Universal Studios Japan to provide the most ultra-realistic Resident Evil experience yet. Rather than just another themed roller coaster or a “haunted house” type ride where zombies pop up and spook you, USJ is giving you a gun, a limited supply of ammo, and throwing you into an onslaught of zombies. The combination of USJ’s special effects prowess and Capcom’s expertise has resulted in an incredibly detailed recreation of Racoon City to play in. It’s called “Biohazard: The Real” (Biohazard is the Japanese name for the Resident Evil franchise).

In the attraction, players will be equipped with a replica lifelike handgun with a realistic weight and a gauge that measures your level of infection. The goal is to get to the end before reaching maximum infection. Of course, being an Resident Evil themed attraction, ammo will be sparse, so you’ll have to be both quick and efficient to survive.

The attraction/game will begin on 19 July and run until 9 September in the Palace Theater in the New York section of the park. Then from 12 September to 10 November, it will operate only on Friday to Monday or holidays. There’s currently no word if it will make it to the American Universal Studios, so if you’re an ex-pat or planning a trip to Japan this summer, it may be worth checking out.

USJ also boasts that the chances of surviving the game without infection are “approximately zero percent.”

I’m currently planning a trip down to southern Japan this summer, and I’ve put visiting this attraction at the top of my list! I’ll be sure to let you all know how it goes, and see whether or not USJ’s claims about the game’s difficulty are true.

Journey Dev is Excited For Kinect 2.0

Nolan North: Nathan Drake “Is Me”