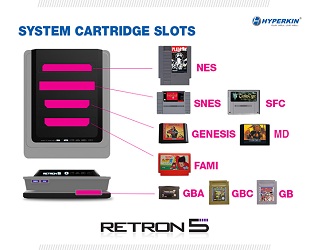 One of the persistent problems of being a gamer across the space of a few decades is that after awhile you start to run out of shelf space. While games themselves take up a lot of room, the real space killer is often the consoles. Big, bulky and pretty much necessary if you want to play older games without resorting to emulators, keeping all of them out and about tends to begin to feeling to less than justifiable as time goes on.

Luckily, Hyperkin, the company behind a slew of retro gaming supplies, is getting ready to launch the RetroN 5, a multifunctional retro console designed to help players condense their aging hardware collection into a single, simple machine. Slated with an October 31st release date, it’s the latest iteration of the RetroN series and will have feature multiple cartridge slots that allow it to play Famicom, Super Famicom, NES, SNES, Mega Drive, Genesis, Game Boy, Game Boy Color, and Game Boy Advance games. It will also be compatible with HD televisions, making it possible to ditch that fat TV you’ve been hanging onto to play old games. Gamers interested in the RetroN 5 can pre-order it from Amazon for $99.99.

As the proud owner of a RetroN 3, I can attest to just how useful these consoles are. I’ve been playing videogames since the early 1990s and while my collection isn’t massive, it was getting to be a bit of a hassle to make room for all of my hardware. The RetroN 3 allowed me to pack away an entire shelf worth of gaming consoles that I’d honestly only been using a few times a year any ways. The RetroN 5 sounds even better, and while I’m not sure if I’ll be upgrading just yet, it’s definitely on my wish list for the future.