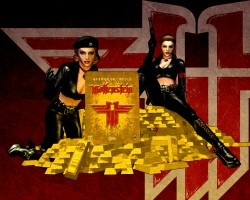 The videogame-to-movie trend continues to move along with the announcement that rights to Return to Castle Wolfenstein have been secured by producer Samuel Hadida.

Roger Avary, who teamed with Hadida for the game-based Silent Hill movie, has been attached to write and direct. Along with Silent Hill, Hadida has also been involved in the production of the videogame-based Resident Evil movies and is working on an Onimusha adaptation. Avary’s writing credits include The Rules of Attraction and Beowulf, as well as contributions to Pulp Fiction and Reservoir Dogs.

“I’ve been playing the character of BJ Blazkowicz since the epic Wolfenstein 3D first bruised my brain and have ever since wanted to bring his adventures to life on the big screen,” Avary said. “It’s time to bust some dams, storm some bunkers and blow up some bridges.”

The rights to the Wolfenstein property had originally been picked up by Sony, but had reverted back to franchise creator id Software. The original Wolfenstein 3D was released in 1992 and helped establish the FPS genre as a dominant force in gaming; Return to Castle Wolfenstein, the most recent entry in the series, came out in 2001. Another famous id title, Doom, hit movie screens in 2005 and met with modest success.

What Is Quality of Life?