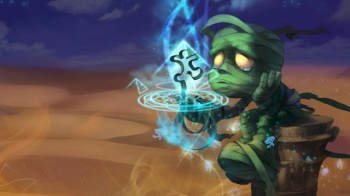 Initially a huge 5v5 map, Magma Chamber was tweaked down to 2v2/1v1, before Riot eventually decided it just wasn’t working.

Riot has firmly planted the final nail in the coffin of League of Legends‘ long in-development “Magma Chamber” map. In a blog post, it announced that the Magma Chamber map, as well as the new “Showdown” 1v1/2v2 gamemode, were not sustainable as “permanent features,” and has subsequently halted development of both the map and the gamemode.

“Ultimately, we concluded that Magma Chamber simply isn’t the right place for us to further develop a great 1v1/2v2 experience and the mode itself isn’t sustainable as a permanent feature.”

Riot says one of the biggest reasons that Magma Chamber was given the chop was that it “ran well on the nigh-supercomputers pros were playing on, but it was far from optimized and had a slew of unforeseen performance issues”. The developer added that the 1v1/2v2 showdown gamemode, while seeing a lot of popularity when it was first released, dropped down to less than 1% of what players were playing after a week.

Long-time League of Legends fans will remember that the Magma Chamber was first teased all the way back in 2010. This vision of the map eventually re-worked into what would become Dominion, and we thought that this would be the last we saw of Magma Chamber.

However, the map recently saw a revival at a special “All-star Showdown” event in China, having been re-worked into a 1v1/2v2 map. When the 1v1/2v2 showdown launched during this year’s Christmas event, players were puzzled to find it taking place on the Howling Abyss map, rather than the Magma Chamber map they earlier.

It’s always sad to see developers cutting features, but I suppose Riot knows best. Are you saddened by the loss of Magma Chamber and the showdown gamemode?