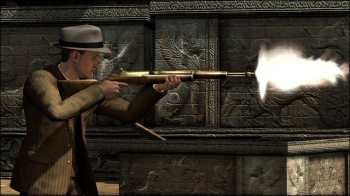 George Miller’s movie company might pick up the L.A. Noire developer because of how its leader addresses deadlines.

Team Bondi’s had a rough go of things lately, between the accusations of terrible work conditions and the news that Rockstar had no desire to actually work with the studio ever again. As a result, a couple of new rumors have started floating around the Web, claiming that the developer is facing bankruptcy and is possibly going to be acquired Kennedy-Miller Mitchell Films, the movie production company currently working on Happy Feet 2.

The Neogaf forums is filled with posts claiming that the company is filling out the preliminary paperwork for bankruptcy procedures. That said, requests for a statement from a Team Bondi spokesperson has yet to appear, so this is pretty unsubstantiated.

Meanwhile, sources from within Dr D Studios (a subsidiary of KMM) recently spoke to Kotaku about the possible acquisition:

“The word is going round that Team Bondi is being folded into Kennedy-Miller Mitchell Films studios.

“Brendan McNamara was seen walking through the buildings of Dr. D yesterday, where Happy Feet 2 is being made.”

“Because Dr. D is filled with former Team Bondi employees who left due to the abusive work conditions. This unexpected visit was quite… unsettling – to put it mildly.”

Rumor also has it that George Miller himself was impressed with McNamara’s “attitude to deadlines” (read: slave-driving techniques) because his company is running behind schedule on Happy Feet 2. If KMM ends up acquiring Team Bondi and brings in McNamara to run a division, how long do you think it’ll be before the man’s tactics end up making headlines again?