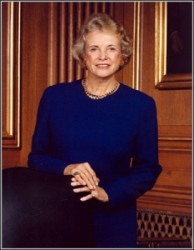 Former Supreme Court Justice Sandra Day O’Connor is putting her experience as a jurist to work in a new and unexpected direction: As a game designer.

“Only one-third of Americans can name the three branches of government,” O’Connor said in a keynote address to the Games For Change conference, “but two-thirds can name a judge on American Idol.”

O’Connor spoke of a project she is working on called Our Courts, described in a Wired report as an “online, interactive civic education project for seventh- and eighth-graders” designed to help teach them about the U.S. legal system. She said the No Child Left Behind act, enacted in 2001, has resulted in the near-elimination of civics education in public schools. “We can’t forget that the primary purpose of public schools in America is to produce citizens who have the skills and knowledge to sustain our form of government,” she said. “Public education is the only longterm solution to preserving an independent judiciary and constitutional democracy.”

The judge is working on the project with James Paul Gee, a professor at the University of Wisconsin-Madison. The game will present students with “real issues and real problems,” O’Connor said, giving them the opportunity to “step into the shoes of a judge, a legislator, an executive – teach them how to think through and analyze problems, take action and voice opinions to their elected representatives.” As an example, she cited an early exercise centering on First Amendment rights, using cases like Tinker v. Des Moines and “Bong Hits 4 Jesus.”

Despite the dearth of civics education, O’Connor said she was “encouraged” by youth who become involved in political campaigns via the internet. “Emailing, blogging, networking on Facebook – they can take leadership, make their voices heard through tools that belong to their generation,” she said. “We need to give them ownership to allow them to interact with the material.”

Our Courts is currently slated for release in September 2009.