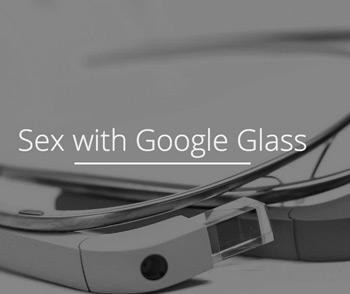 Humans have a knack for turning every piece of new technology into an excuse for nudity. Don’t forget, the internet was originally intended to be a tool for the exchange of scientific ideas, and a quick glance at your browser history will prove that things have changed. So, it probably won’t surprise you to learn that Google Glass, a device that isn’t even on the market yet, has already been co-opted by randy app developers.

Here’s the idea: in the future, all of your sexual partners will own Google Glass. So, when you’re gearing up for a romantic episode, you and your partner will simply say “ok glass, it’s time.” This will stream what you see to your partner’s device, and vice versa. So, if you’ve ever wondered what it would be like to have sex with yourself, all of your questions are about to be answered.

Once you’ve become sufficiently disgusted by your own sexual reflection, you’ll say “ok glass, pull out,” and head into the bathroom for a good cry.

After you’re done, the resulting video will be viewable for five hours before it’s deleted forever. Though, I think it’s probably safe to assume that users will find a way around that feature, or they’ll just choose a recorder that uses fewer awkward commands.

Sex with Glass is a free app, and will presumably hit the market with Glass. But Google hasn’t revealed the device’s release date yet, so you’ll have to make do with your smartphone camera until then.