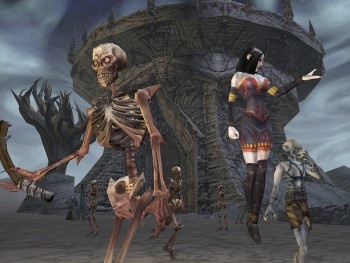 Shadowbane, the free-to-play PvP MMOG that launched in 2003, is shutting down.

Shadowbane was an early pioneer in PvP gameplay, focusing on player combat and guild warfare rather than instanced questing, with a dynamic design that allowed players to change the game world itself as the game evolved. In 2006 Shadowbane became free-to-play with costs supported by ads that run at various junctures such as start-up and on a player’s death. In March 2008, on the fifth anniversary of the game’s launch, all characters and assets were erased in a “reboot” designed to take advantage of new servers and improve the game’s performance and stability.

“We come to you now with regret and sadness, but also happiness and pride,” a farewell message posted on the Shadowbane website says. “Regret and sadness that it has finally come to this and as of May 1, 2009 the Shadowbane servers will be powered down once and for all. Yet happiness that it lasted so very long, and pride to be able to stand before such a passionate community to thank you for your undying support and unwavering loyalty to Shadowbane.”

A brief history of the game and the obligatory thanks to the creators and players are included but the actual reason for Shadowbane’s demise is left unmentioned. It’s probably not a complicated tale – times are tough and belts are tightening – but we hope to have some details in the near future. In the meantime, read the full announcement and post your digital condolences (or outbursts of irrational rage, whatever tickles your fancy) here.

Arthas: Rise of the Lich King Novel Giveaway – TODAY ONLY