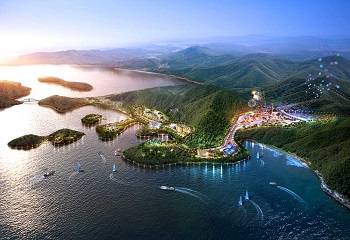 The huge development will be dedicated to appreciating and working on robotics.

Robots dominate our lives, but not in the ways you’d expect. While they don’t act like electronic house servants, they do build a remarkable amount of our stuff. They do the dangerous tasks like exploring the depths of both outer and inner space, and can even program new games inside old ones. Now, South Korea has broken ground on “Robot Land”. Less theme park and more World’s Fair, Robot Land is designed to stimulate interest in robotics and fuel the robotic industry.

Korea’s Ministry of Commerce, Industry & Energy has been working on the project since 2007. It’ll include a convention center, robot exhibition hall, and robot-themed parks and hotels. The final phase of construction should be completed in 2018. While they are only just now breaking ground on the project, it’s already received about $1.23 billion US dollars in private and public funding. While the Masan Robot Land has more of an industry focus, its sister project is more of a theme park, complete with massive robot statue.

Robots are a huge deal for South Korea. Not only is their robotics industry experiencing huge growth rates, but the Korean government has set a goal to have a robot in every household by 2020, which sounds like a terrifying Cyberman plot. Well, here’s hoping that Robot Land doesn’t become the next Westworld.