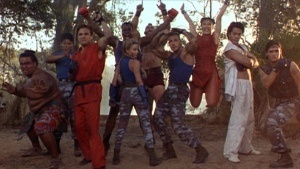 For you, the day “Street Fighter: The Movie” graces your Blu-ray player will be the most important day of your life. But for Capcom, it’s just Tuesday.

No film better symbolizes the plight facing gamers at the cinema quite like Steven E. de Souza’s “Street Fighter.” Though it’s not exactly tolerable like “Mortal Kombat” and it’s not classified as cruel and unusual punishment in some countries like “Double Dragon” is, the “Street Fighter” film thrives as a beacon of mediocrity; that everything you ever knew about Street Fighter is wrong and sometimes the best of comedies are the ones that were never intended to be in the first place.

Come February 10, the acting tour de force that is Jean-Claude Van Damme and Raul Julia can be seen in true, 1080p, widescreen brilliance as “Street Fighter: Extreme Edition” heads to Blu-Ray. The disc, which is set to release sometime around the console launch of Street Fighter IV, includes plenty of extras dedicated to the latest entry in the long-running series, such as game and anime teasers. Rounding out the package are the usual assortment of extras including “making of” features, outtakes, deleted scenes, director commentary and more. If you already own the special edition DVD set of the film, however (which you totally should), then this may not be news to you.

There is currently no price set for the release, though you should probably start saving up your Bison dollars now if you want to relive the greatest moment in cinematic history in 1080p. I know I do.