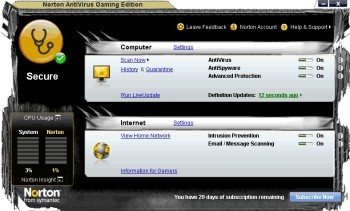 Symantec has released Norton AntiVirus 2009 Gaming Edition, a special version of its famous security software “that won’t slow you down!”

The new Gaming Edition of Norton AntiVirus looks a lot like the old regular edition of Norton AntiVirus, but with the addition of a “gamer mode” meant to keep the software from interfering with gameplay. The program will automatically suspend updates, alerts and other background antivirus applications when the system is running in full-screen mode, all of which can also be easily toggled on and off manually, and will only perform “resource intensive” activities when the computer is idle. Even when running, the software draws minimal resources, requiring less than six megabytes of RAM and adding less than one second to boot time.

“Gamers are an extremely demanding audience that simply won’t tolerate anything on their system that detracts from gameplay,” said Symantec Senior Vice President Rowan Trollope. “Norton AntiVirus Gaming Edition keeps gamers protected online and runs perfectly undetected in the background, meaning no interruptions, no pop-ups, and with the same award winning zero-impact performance of our 2009 products.”

It’s great news, really, because this sounds like a big step forward in making antivirus software transparent and non-intrusive, just as it should be. One question, though: Why do we need a Gaming Edition? Wouldn’t it be easier to just work this stuff into the standard 2009 release? It’s not like they’re inventing The Wheel 2.0 here; they’re just making Norton AntiVirus suck less, which, while commendable, doesn’t strike me as warranting a special stand-alone release. In fact, since both the standard Norton AntiVirus and the new Gaming Edition carry the same price tag, and according to Symantec they’re absolutely identical except for the addition of the “gamer mode” stuff in the Gaming Edition (seriously, check it out here), is there any reason at all to stick with the original?