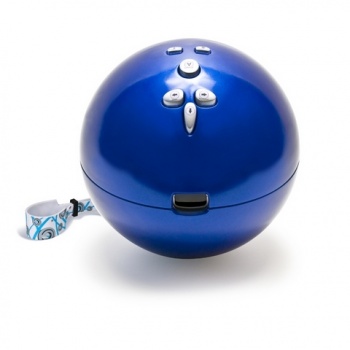 Here’s a surefire way to destroy your expensive TV or severely injure your loved ones: CTA Digital’s Wii Bowling Ball, an accessory that’ll give Wii Bowling that extra edge of realism that’s acquired by nearly guaranteeing you’ll break something while using it.

For all that Nintendo tries to make sure that people’s idiocy or clumsiness doesn’t get the better of them and cause something to be destroyed while using the Wii, at some point it just becomes inevitable. Or, rather, more than inevitable if you’re talking about using something like CTA Digital’s newest accessory, the Wii Bowling Ball.

Designed to be the first accessory “to be fashioned after an authentic bowling ball,” the Wii Bowling Ball, should you be ballsy enough to try it, will probably break windows, TVs, expensive vases, and maybe some bones too. It’s supposed to turn your Wiimote into “the optimum performance-enhancing accessory,” which I think is a secret code for wrecking ball.

Here’s how it works: You open up the ball, place your Wiimote inside, and then stick your fingers into the three holes, just like a real bowling ball has. Then you can proceed to enjoy Wii Bowling, Brunswick Pro Bowling, Ten Pin Alley 2, and other quality bowling titles. Don’t forget to put on that industrial strength wrist band though, and, finally: “Even though holding and bowling the ball is so like-like [sic] to the actual sport, never, ever release the ball!!”

There are two exclamation marks there, so don’t forget that advice. CTA Digital is not liable for any kind of destruction you cause with this thing, as they point out twice (once in regular print, once in CAPS) on their product page. This product is not “licensed, designed, sponsored or manufactured” by Nintendo. Big surprise, they probably don’t even want to be mentioned in the same breath as this thing.