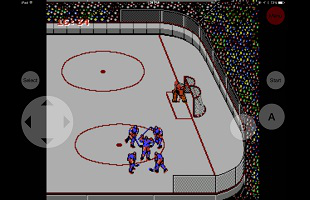 If you go find Floppy Cloud in Apple’s App Store, you’ll be greeted by a clip art-ish looking floppy disk logo, sitting atop an app that promises “the good ol days,” of local file storage. Once downloaded, Floppy Cloud enables you to preview files stored in your FTP or Dropbox — or download them locally, if need be.

But the real beauty of Kyle Hankinson’s app? It has a built-in emulator for NES and Super Nintendo ROMs. And it’s not half bad for a secret software feature.

The Easter egg is fairly easy to use. Assuming you have an account (or an FTP server for the power users out there), you can put ROMs in any of your Dropbox folders, then allow the app to access your Dropbox account. Once enabled, Floppy Cloud displays Dropbox files as you would expect it to. From here, you click the ROM zip file, then the .nes or .smc file within.

If you have any interest in Floppy Cloud, now is the time to download away. Apple will likely remove it from the App Store, even though the company is on a holiday freeze for its app services.

I’ve downloaded the $1.99 app myself,and it works as advertised without much fuss. Any NES ROM will do, I think, although SNES ROMs are tricky (they need to be .smc files). Once your cartridge backup files of choice are loaded up, onscreen controls automatically display, and games load rather seamlessly. I spent some time with Blades of Steel, and Super Bomberman, and aside from the occasional audio glitch, gameplay was fine overall.

This is a grey area, sure — the usual “only play games you’ve made ROM backups of yourself” disclaimer goes here, for those who need it — but it’s a nice, not-so-secret-anymore gamer gift for the holidays. Enjoy it while you can!

The 200th Column – You Asked For This