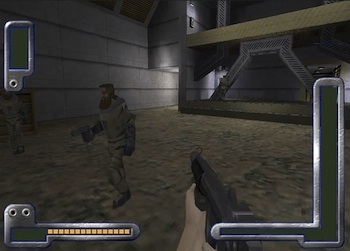 There’s a lot of rose-tinted nostalgia for Half Life in gaming’s memory buffers. Even if it hasn’t aged as well as one might hope, those pre-millennial memories are often enough to keep the love alive. However, when first firing up this alpha preview, you might wonder how it all fell into place. Uncovered by Redditor jacklejayzer, this early build seems to be intended for print magazines (remember those?) to use when writing preview stories. In addition to placing the disc image online for all to see, he’s also put the ancient “compact disc” up for auction on Ebay for the collectors among you.

Jacklejayzer posted an image of the disc online here, but heavy traffic seems to have it shut down. Thankfully, kindly Redditors have provided mirrors for interested parties in the original thread. The disc contains screenshots, a promotional video, and a playable demo that still runs on modern hardware with a few tweaks.

While preview builds are always rough around the edges, this one has some particularly interesting aesthetics choices. Most notably, the panicked, bug-eyed expressions worn by the guards and scientists lend a quirky, light-hearted tone to the otherwise industrial proceedings. There also seem to be shots of a team of scientists in hazard suits sporting impressive beards. Meanwhile, the HUD is comprised of bulky chunks of metal so obtrusive that there’s a hotkey to remove it entirely. While it’s obvious that Valve knew they still had more work to do, it’s fascinating to flip back through their baby book and see this classic in its larval form.