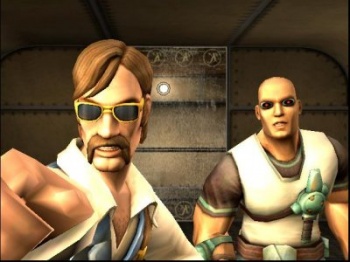 Free Radical co-founder, Steve Ellis, reckons “pretty much every FPS loses money” unless it has “Call” or “Duty” in the title.

Since the dawn of consciousness, man has struggled to answer a series of existential questions. “Who am I?”; “Do I have a purpose?”; “Is there a God?”; and most compelling of all “where the hell is TimeSplitters 4?”

Fortunately, Steve Ellis, co-founder of TimeSplitters developer Free Radical Software, has seen fit to answer that last question, though the answer may be a little upsetting. Apparently, there’s no TimeSplitters 4 because no one would buy it.

“Nobody really buys any FPSes unless they’re called Call Of Duty,” he told Edge. “I guess Battlefield did okay, but aside from that pretty much every FPS loses money. I mean, [look at] Crysis 2: great game, but there’s no way it came anywhere close to recouping its dev costs.”

The problem isn’t that FPS don’t make money – the genre sells incredibly well – but that the costs involved in producing and marketing a AAA FPS are astronomical, and only the biggest, most successful titles are making back their budgets.

“I spent the whole of 2008 going round talking to publishers trying to sign up TimeSplitters 4,” he said. “There just isn’t the interest there in doing anything that tries to step away from the rules of the genre – no one wants to do something that’s quirky and different, because it’s too much of a risk. And a large part of that is the cost of doing it.

That’s the rationale behind Ellis’ decision to leave Free Radical and core gaming behind in order to form Crash Lab, which thus far has announced two games iOS. Considering Ellis is intimately intertwined with the history of first person shooters – he coded N64 classic, GoldenEye’s, now legendary multiplayer mode – that’s a huge loss for the genre.

“We’ve been through more than a couple of console generations and seen things grow and grow to a stage where it’s not really the business we got into,” he continued. “It’s not really what we signed up for at the start.

“There’s plenty of people coming out of university who are dying to do that, so let them find out what it’s like and we’ll do something different!”