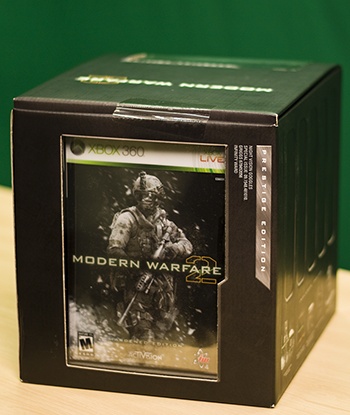 Has a deficit of cash or a surplus of common sense prevented you from springing for Modern Warfare 2‘s Prestige Edition? Then experience it vicariously through these unboxing photos.

There’s a good chance that you’ve already purchased your copy of Modern Warfare 2, and unless you’re a stalker-in-the-making or a rabid Infinity Ward fanboy, it probably wasn’t the $150 Prestige Edition, which ups the ante on the $80 Hardened Edition by adding a fully functional pair of night-vision goggles and a stand to hold them while you’re not busy skulking around in the middle of the night. So when we received a couple copies of the Prestige Edition this morning, we took it as an opportunity to show the less “prestigious” among us what they were – or weren’t – missing. (Expect our full review of both the game’s single-player and multiplayer components next Tuesday.)

First up: the case. Inside the Prestige Edition is a copy of the Hardened Edition of Modern Warfare 2, which includes a fancy tin containing the game disc and a 33-page art book for fans to pore over. Sure, it’s not exactly Okami or Ico material, but if you wanted to know why they decided to tweak the contours of the MP5 in MW2, Behind the Lines: The Art of MW2 should provide some insight.

No matter. People don’t buy the Prestige Edition for a crappy plastic head; they buy it for the goggles. And I’m quite happy – and, frankly, surprised – to report that they’re actually pretty effective. After gingerly removing them from their packaging and scrounging up five AA batteries (not included), we turned off the lights and powered them on. Minor disappointment: They don’t make that signature infrared “whine” when you flick the switch. In fact, they’re totally silent, which is more practical but slightly less cool.

Aside from that, they work pretty much as expected. There are three toggles on the top left side of the goggles: an on/off switch, a switch that lets you choose between a black-and-white or green filter (go with green – it’s more authentic), and a switch that turns on a ring of red LEDs at the front of the goggles, which sharpens the image but also gives away your position to anyone in the vicinity.

So, is the Prestige Edition worth the $90 premium over the standard retail copy of Modern Warfare 2? If you’ve always wanted the ability to see in the dark, I’m going to say “yes.” A quick Google search informs me that a pair of standalone night vision goggles costs anywhere from $135 to $2,800, and while the pair that comes with the Prestige Edition seems liable to fall apart at the first sign of a combat situation, they seem perfectly useful for things like getting the mail at 2 a.m. without using a flashlight, or watching your roommate while she sleeps. Just make sure to disengage those red LEDs to avoid any awkward conversations the next morning.

Is Phoenix Wright: Ace Attorney Coming to the Wii?