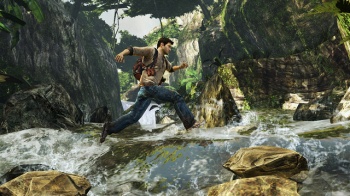 The new director is also bringing a new take on the movie, one that gamers should be much more familiar with.

A new director has stepped up to the plate for the Uncharted movie. Replacing David O. Russell is director Neil Burger, whose work includes The Illusionist and this year’s Limitless, which starred Bradley Cooper and Robert De Niro.

Burger landed the job, which also includes writing the script, after impressing the studio and producers with his vision for the movie. His interpretation said to be much closer to the original games, which isn’t entirely surprising as it was creative differences between Russell and Sony that led to Russell’s departure from the project. Russell wanted Drake to be part of a shadowy family that policed the world’s trade in antiquities, a plot element that presumably has now been ditched.

It’s not clear what this means for the movie’s cast either. Mark Wahlberg was supposed to star as Drake, but he and Russell seemed to come as a set. That’s not to say that Wahlberg won’t end up being in the movie, but it does raise a question mark over his involvement. Russell was also apparently keen to have Robert de Niro and Joe Pesci in the movie, but they were supposed to play Drake’s father and uncle, and if the film will be closer to the game then it’s likely those parts don’t even exist anymore.

There’s no indication as to when the movie will come out – hardly surprising as it isn’t even written yet – but the next Uncharted game, Drake’s Deception, comes out for PS3 on November 11th.

Headless Kamikaze: Screams of Glory Goes Behind the Scenes of Serious Sam 3