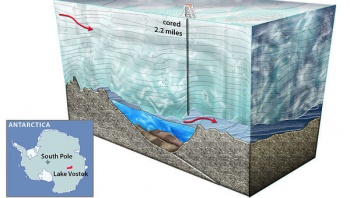 Lake Vostok is 2.3 miles below antarctic ice, and has been isolated for millions of years.

Russian scientists searching for life in subglacial Lake Vostok have found bacterial DNA that does not match any of the known subkingdoms of bacteria. “After excluding all known contaminants…we discovered bacterial DNA that does not match any known species listed in global databanks. We call it unidentified and ‘unclassified’ life,” said Sergei Bulat, a researcher from the Laboratory of Eukaryote Genetics at the St. Petersburg Nuclear Physics Institute. Lake Vostok is 2.3 miles (3.5 kilometers) below the ice of the Antarctic, and could have been frozen over as early as 17 million years ago. It has spent that time as an isolated environment, and any bacteria living inside its waters would have been split off from the outside world – evolving in their own environment. Building a phylogenetic tree from the microorganisms to determine its relationship to other species showed that the bacterium didn’t fit into any categories in its taxonomic domain – in short, it has no known relatives.

The bacteria are likely extremely adapted to the high-oxygen environment inside the lake, and survive by geothermal heat. “If it were found on Mars, people would call it Martian DNA. But this is DNA from Earth,” said Bulat. Tests, according to Bulat, are ongoing, but the chance further testing disproves the results is low. More samples are coming, which would give conclusive proof, but they are travelling to Russia by ship from the Antarctic. Researchers began drilling in 1989 to reach Lake Vostok, and it took 23 years to drill and be absolutely sure that the researchers wouldn’t contaminate the lake when they reached it. In earlier studies of Vostok water, no microbes were found.