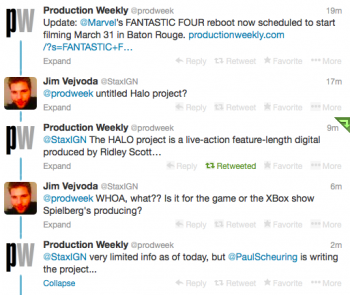 The Production Weekly Twitter feed exists to spread movie news far and wide, but this time out it might have gone too far. It started with an innocent Tweet about the Fantastic Four reboot, but soon segued into Halo territory. If Production Weekly is to be believed, Alien director Ridley Scott will produce a feature-length digital Halo movie. Prison Break‘s Paul Scheuring is the project’s writer, according to Production Weekly.

All those Production Weekly Tweets have since been deleted, leaving everyone in the dark. However Production Weekly did Tweet a SciFied article, based on its original Tweet, that discusses the Ridley Scott Halo movie, so it’d seem Production Weekly isn’t disowning the idea altogether. Or maybe this is just the internet Ouroboros at work again.

It’s always possible Production Weekly just had a brainstorm, and mixed up the Spielberg Halo project we already know about with something altogether different. But that would be one hell of a storm, particularly since Spielberg’s working on a TV series and Production Weekly talks about a movie length project.

In an odd note that may, or may not, have something to do with this saga, Paul Scheuring is working with Ridley Scott on a project called Klondike, for the Discovery Channel. Did Production Weekly get its wires crossed? That’d be a remarkable leap, from the wilderness of Alaska to the adventures of Master Chief.

Update: Yep, as suspected, this one’s a dud.

“We plan to continue telling the Halo story through innovative channels, but there are no plans for a Halo motion picture at this time,” says Microsoft.