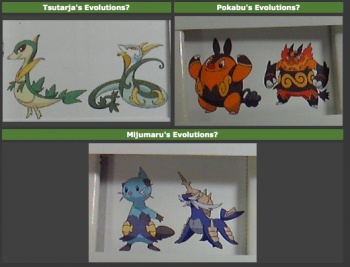 If these “leaked” images of the final evolutions for the Pokemon Black & White starter critters are legit, I take back everything bad I ever said about that stupid-looking otter.

When Nintendo revealed the three starter Pokemon for the upcoming fifth generation of handheld Pokemon games, there was only one question on the minds of Poke-fans: What will they look like fully evolved? After all, the cute little Charmander turned into the badass flying Charizard, and the adorable and harmless Piplup became the giant steel penguin that was Empoleon. Surely these guys would turn into something awesome too, right?

Fake fan-made concepts for the final Black & White evolutions have been all over the internet, but a set of images has surfaced on Japanese message board 2ch that could be the real deal – seen here, to the right. Lending credibility to the images’ authenticity is the fact that information that would later be confirmed as true about the upcoming Pokemon games – such as the new female professor and triple battles – had been previously leaked on the same 2ch board.

That being said, these are of course completely unconfirmed. While they look like they could be on the up-and-up, this could just be an instance of someone imitating the Pokemon series’ style very, very well.

If they are real, though? Hoo boy. I’m actually very pleased with how they’re turning out, and I can honestly say I didn’t expect any of them to look this way – which could actually be further proof for them being real. Tsutarja’s serpentine final evolution looks great (perhaps Grass/Dragon), and the shell-armor look of Mijumaru’s sea-otter-slash-harpoon-gun makes me take back every bad thing I ever said about its dopey-looking original form.

The only one I’m not on board with is Pokabu’s evolutionary line. Oh sure, it looks fine, but it also looks like it’ll turn out to be a Fire/Fighting type – just like the other two fire-type starters before it. Yes, Fire/Fighting is a great type mix, but do we really need a third one in addition to Blaziken and Infernape? Really?

Whether real or not, it’s a cool-looking set – and with the Japanese launch of Pokemon Black & White right around the corner (September 18th), we’ll learn either way soon enough. Incidentally, judging by Japanese preorder numbers, Pokemon Black & White are already the fastest-selling DS titles of all time – and they aren’t even out.

Update #1: Further unsubstantiated rumor is calling the Grass line Grass/Dragon, the Fire line Fire/Dark, and the Water line Water/Fighting. This seems a bit dodgy to me, but it’d be better than having another Fire/Fighting starter, so we can only hope.

Update #2: A user on 2ch has claimed that he made them as a hoax. Of course, the authenticity of this claim on the anonymous message board is as difficult to verify as the original images were. There’s literally no way to know for sure until Nintendo officially unveils the ‘mons.

If fake, though, we can still look at these as a cool and creative idea of what could be.

Update #3: Serebii has confirmed these as the real deal, with a “slim chance” that it’s wrong – the source has been 100% accurate thus far. (via VG Tribune)