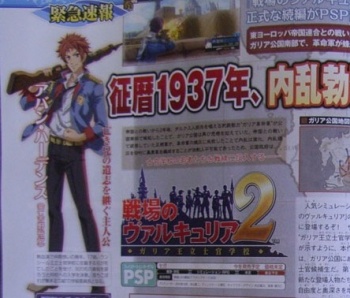 Sega’s Valkyria Chronicles is getting a sequel on the PSP and mixing up the SRPG formula a bit, Persona-style, by adding a school setting to the original’s wartime vibe.

Valkyria Chronicles‘ ardent community of fanboys and fangirls are surely celebrating for the recent revelation of Sega’s sequel to their beloved SRPG, unveiled in this week’s issue of Famitsu. But the Valkyria sequel might not be what they, or anyone else, was expecting. The series is making two major moves: off the PS3 and onto the PSP, and from the battlefields into the academy.

Battlefield Valkyria: Galia Royal Military Academy, as it’s currently titled in Japanese, takes place two years after the events of the first Valkyria Chronicles, in 1937. According to Famitsu, the guiding concept for the game is “school + war,” so the game will follow the adventures of cadets at the Ransiru Royal Military Academy as they prepare to head into battle.

Like another Japanese RPG series that mixes schoolyard shenanigans with RPG gameplay, Persona 3/4, Valkyria 2 will feature seasonal changes and school events. No details if there’s any kind of social/dating sim, but SRPG + dating sim sounds like a winning formula to me.

As would be appropriate for the new setting, Valkyria 2‘s cast of characters look a bit more easygoing and youthful than the original’s. You’ve got your hotshot main character, Avan Houdens, a rifle-toting redhead trying to fulfill his dead brother’s final wish, a somber looking chap with a flamethrower, and a ditzy blonde named Cozetto Kourhaas. Everyone’s dressed in school uniform, even in battle, it appears.

Speaking of battle, judging from the single battle screenshot in the scan, Valkyria 2 will take on the same battle system as the first game. Some things have probably changed, though we’ll have to wait for more info to be revealed or translated to find out. Visually, the game doesn’t seem to have lost too much in its shrinking for the PSP – the same cel-shaded art style and graphics engine are used here.

So why the PSP? Probably because there’s a large userbase to tap in Japan, where the PSP commands a strong following thanks to the phenomenon that is Monster Hunter. That and the new hip, youthful slant on the series may endear Valkyria Chronicles to a larger audience, Sega probably hopes.

Valkyria Chronicles 2 will be released in Japan this winter.