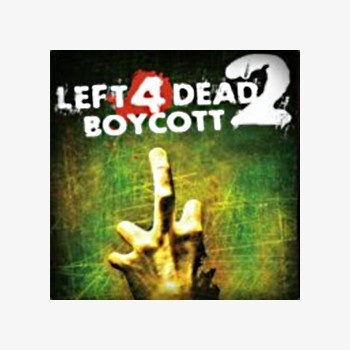 A group of angry gamers has commemorated Valve’s announcement of a sequel to the hit zombie-killer Left 4 Dead by forming a Steam Group dedicated to boycotting it.

When I heard that Microsoft and Valve had announced Left 4 Dead 2 I said to myself, “Hey, that’s cool. A follow-up to a hit videogame is about as surprising as a sunrise but I’m always up for a little more zombie-shootin’.” Good news, right?

Not necessarily. It seems lot of people were unhappy about the announcement, which they see as a betrayal of Valve’s “promise” to support Left 4 Dead with new content, and over 3000 of them have joined a new Steam Group called L4D2 Boycott (NO-L4D2), complaining about everything from Valve’s lack of commitment to Left 4 Dead to the new game’s overly colorful “visual aesthetic” and crappy fiddle music.

Is it really all that bad? Left 4 Dead 2 may be more of an incremental update than an all-out zombie revolution but that’s hardly unusual in a sequel and given Valve’s track record, producing a follow-up to a major hit game in the span of a single year strikes me as a step in the right direction, not something to complain about. Half-Life 2 came out four-and-a-half years ago and we don’t even have a release date for Episode 3 yet!

The L4D2 Boycott group is growing fairly quickly, although it’s impossible at this point to say whether that’s a sign of widespread discontent or merely that people really like to join online social groups. But if either one sounds like your cup of tea, feel free to join the rage party at steamcommunity.com.