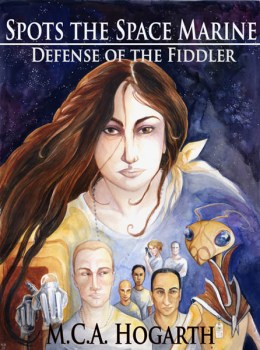 Warhammer 40K publisher Games Workshop appears to be lining up a claim that the term “space marine” belongs to it and it alone.

To Games Workshop, however, there is only one space marine, and it’s the Space Marines from the Warhammer 40,000 tabletop wargame and related properties. The company holds a trademark on the term for “board games, parlor games, war games, hobby games, toy models and miniatures of buildings, scenery, figures, automobiles, vehicles, planes, trains and card games and paint,” but now it appears to be broadening its claim significantly beyond what it has a right to.

In December 2012, Games Workshop used a trademark infringement claim to force the removal of the ebook Spots the Space Marine from Amazon. The book, an homage to classic sci-fi author Robert Heinlein, is still available in physical format but the ebook edition is not, and according to the author, M.C.A. Hogarth, the real worry is that Games Workshop may be readying a similar move against all other uses of “space marine.”

“In their last email to me, Games Workshop stated that they believe that their recent entrée into the e-book market gives them the common law trademark for the term ‘space marine’ in all formats. If they choose to proceed on that belief, science fiction will lose a term that’s been a part of its canon since its inception,” she wrote. “Space marines were around long before Games Workshop. But if GW has their way, in the future, no one will be able to use the term ‘space marine’ without it referring to the space marines of the Warhammer 40K universe.”

Hogarth said it makes perfect sense for Games Workshop to trademark Warhammer-specific terms like “Adeptus Astartes,” but laying claim to “space marine” is simply an attempt to “co-opt the legacy of science fiction writers who laid the groundwork for their success.”

“Even more than I want to save Spots the Space Marine, I want someone to save all space marines for the genre I grew up reading,” she continued. “I want there to be a world where Heinlein and E.E. Smith’s space marines can live alongside mine and everyone else’s, and no one has the hubris to think that they can own a fundamental genre trope and deny it to everyone else.”

Games Workshop does hold a European trademark that covers a wider range of goods than the U.S. and U.K. marks, but as she noted in a January update, trademarks are limited to the territories in which they are granted, meaning that a European trademark cannot be enforced in the U.S.; furthermore, even the European trademark doesn’t cover ebooks, yet that, and not the physical edition, is what was removed from Amazon because of the claim.

Unfortunately, Hogarth says she doesn’t have the resources to take on Games Workshop’s lawyers, so for now Spot the Space Marine remains out of reach and she is focusing instead on raising awareness of the issue. “For now, step one is to talk about this. Pass it on to your favorite news source. Tell your favorite authors or writers’ organizations,” she wrote. “To move forward, we need interest. Let’s generate some interest.”