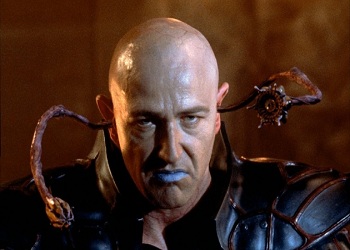 With a movie already in the works Warner Bros. is hoping to roll a natural 20.

Dungeons & Dragons, the 2000 movie based on the groundbreaking tabletop RPG, is one of the unequivocal disasters of fantasy film making. Combining a bad script with awful acting and laughable CGI, it now serves as little more than an step-by-step guide on how to make a lousy fantasy flick and squander the support of a deep rooted fan base. Now, however, it appears that Dungeons & Dragons might be getting a new lease on life on the big screen.

Warner Bros. has acquired the film rights to Dungeons & Dragons and is already well into production of a new film bearing the franchise’s name. The film itself is being made with a script written by David Leslie Johnson. Johnson, who previously penned the scripts for Wrath of the Titans and Red Riding Hood, based his screenplay, entitled Chainmail, off of the board game by the same name. Chainmail the game was developed by Dungeons & Dragons co-creator Gary Gygax and included elements that would later make their way into early editions of D&D. The new film will be produced by Roy Lee, currently working on The Lego Movie, and directed by Courtney Solomon, who directed the original Dungeons & Dragons.

While the presence of Solomon is a bit worrisome, considering his involvement in the 2000 stinker, there could yet be hope for the film. Popular properties like Game of Thrones and the ongoing Hobbit films have laid a solid foundation for other fantasy franchises to establish themselves. Dungeons & Dragons, in turn, is arguably one of the most recognizable properties in fantasy. Granted, it’s probably recognized as being one of the nerdiest names in fantasy, but if the film were done well it could find an audience and traction at the box office. Warner Brothers, in turn, certainly wouldn’t be hurt by having another viable franchise to sequalize. Likewise, the wide exposure offered by a successful film could be a boost for D&D and tabletop RPGs overall.

PS4 Will Not Need To Be Always Online