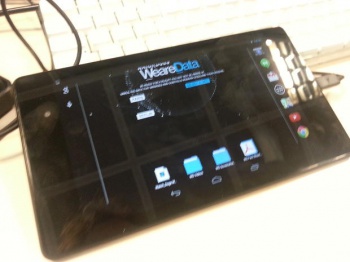 UK gaming press have revealed and confirmed that Ubisoft has given each and every journalist attending its Watch Dogs preview event in the UK a free Nexus 7 tablet.

Update: Ubisoft UK has responded with a tweet of its own:

At a recent Watch_Dogs event some media were given tablets as gifts. This was not in line with our PR policies. Apologies for any confusion.— Ubisoft UK (@UbisoftUK) April 15, 2014

So to be clear, Ubisoft UK was unaware of what folks in their PR department were giving away? Uh, OK …

Original Story:In news that might not sit well with the gaming populace, publisher Ubisoft has given each and every journalist attending its UK preview event for Watch Dogs a free Nexus 7 tablet.

London-based games writer Steve Hogarty, who did not attend the event but confirmed it through associates, tweeted, “It is TRUTH. Ubisoft gave journalists a free Nexus 7 each at an exclusive Watchdogs preview event in Paris. Oh Ubisoft.”

Official Xbox Magazine writer Edwin Evans-Thirlwell also wrote, “We don’t intend to hold onto the tablet, obviously. It’ll be given away to charity, as per a (perfectly polite and amicable) phone conversation with Ubisoft PR after I returned from the trip.”

Thirlwell was not the only recipient of the $200 Google-made tablet that didn’t accept the “gift,” as Videogamer Reviews and Feature editor Steve Burns also went on Twitter to disclose, “For the record: I was offered the Nexus, gave it back to the PR. No reason to take it. I did drink the water that was also in the bag though.”

GamesIndustry European Editor Dan Pearson tweeted, “Ours is going to GamesAid for Ebay auctioning, but yeah, pretty shameless.” Pearson, who did not attend, was referring to Nexus received by Gamer Network sister publication Eurogamer.

Important to note that we don’t know exactly how many people attended the preview event, nor how many of them actually accepted the free Nexus 7 tablets. Even if they did, some of them might be giving the tablets away to charity or something similar. So, bear that in mind before bringing out the pitchforks, alright?

While this might have been an innocent move on Ubisoft’s part, I highly doubt other people — especially non-attendees — will feel the same way. Of course, this freebie shouldn’t influence how the game is reviewed at all, but the mere fact that it might even be part of the discussion now is something that shouldn’t have happened in the first place, in my opinion. And before anyone asks, no one from The Escapist attended the preview event.

What do you think Ubisoft’s motivation is for giving away the tablets to gaming journalists in the first place? And do you think this is a sign that Ubisoft isn’t confident that Watch Dogs will fare well with critics? You can judge Watch Dogs for yourself when the open-world action game hits store shelves this May 27 for the PC, PS3, PS4, Xbox 360 and Xbox One.

Editor’s Note: Updated to clarify that Hogarty did not attend the event, but just tweeted about it. Also clarified that GI.biz did not attend or receive a unit.