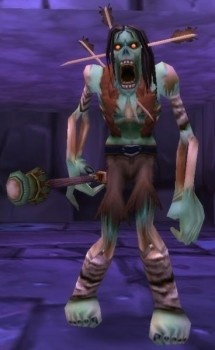 The arrival of the World of Warcraft expansion Wrath of the Lich King is being heralded by a zombie invasion – but it’s the players themselves who are being turned into shambling undead.

Reports are “flooding in” about a zombie uprising in the game, caused by infected crates found in the town of Booty Bay. Eurogamer reports that diseased players have ten minutes to be cured by healers from the Argent Dawn faction or by other players with the “Cure Disease” spell, or they become zombies, hostile to everything in the world except other undead. Players who are turned get a new zombie skill bar, along with the ability to spread the undead plague to other players, but once they join the legions of the undead, the only way out is death.

“You can no longer cast the spells/abilities that you had as a normal character, and formerly friendly NPCs now consider you an enemy. You can, however, cast new, unique zombie spells,” Blizzard wrote in a “Zombie Infestation Survival Guide” posted on the World of Warcraft forums. “As a zombie, you are part of a special faction that is friendly with all zombies and can converse with them, regardless of whether they were part of the Horde or Alliance in their mortal existences.”

The Argent Dawn healers have appeared throughout the World of Warcraft in response to the plague and will automatically heal nearby players, but some people still aren’t terribly pleased with this recent turn of events, particularly those who don’t enjoy PvP combat. Unlike the Corrupted Blood plague, however, this one looks fairly easy to contain and control – although at least one Blizzard staffer has posted an ominous-sounding message in the forums obliquely implying that situation could change.