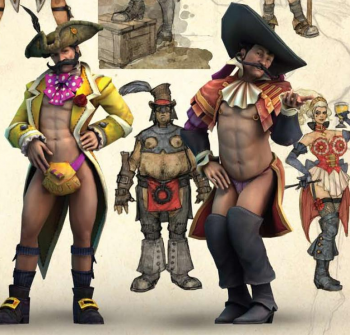 You can pay for sex in Fable III, but you won’t be doing it with these guys (and gals).

On some level, you really have to admire the folks at Lionhead Studios and their dedication to their craft. In Fable III – as in Fable II – your characters will be able to purchase the services of prostitutes, both female and male alike. (Hey, what happens in Albion, right?)

This means that some artist – or group of artists – at Lionhead had the rather interesting job conceptualizing a group of sex workers for a semi-Feudal era that never actually existed. Unfortunately for said artists, some of their would-be prostitutes never made it into the actual game for one reason or another.

To the right, you see but a small section of a larger image showing off some of the sex-worker designs that never quite made the final cut, courtesy of GamersMint. We can all agree that they’re quite the, er, colorful bunch, no? Heck, one of them even as a pair of assless pants that would make Prince himself proud.

Alas, we will never see these characters in the final version of the game, which releases October 26 in North America and October 29 in Europe. What a shame.

Well, maybe it’s for the best after all.

Aliens: Colonial Marines is Still in the Fight