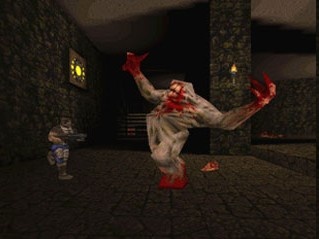 Bethesda Softworks parent company ZeniMax Media dropped a bombshell today, announcing that it has acquired the legendary game studio id Software. (And John Romero is not very happy about it.)

Founded in 1991, id debuted with the popular Commander Keen series but it wasn’t until a year later, with the release of Wolfenstein 3D, that the company began drawing serious attention to itself. In 1993, Doom exploded onto the scene, revolutionizing the industry and turning id into a cultural phenomenon. Quake, released three years later, would cement the studio’s reputation as a leader in technological innovation.

“This was a unique opportunity to team with a smart, sophisticated publisher like Bethesda Softworks where the interests of the studio and the publisher will be fully aligned in the development and marketing of our titles,” said id CEO Todd Hollenshead. “In addition, we will now have financial and business resources to support the future growth of id Software, a huge advantage which will result in more and even better games for our fans.”

“This puts id Software in a wonderful position going forward,” added John Carmack, who will remain in his role as Technical Director at id. “We will now be able to grow and extend all of our franchises under one roof, leveraging our capabilities across multiple teams while enabling forward looking research to be done in the service of all of them. We will be bigger and stronger, as we recruit the best talent to help us build the landmark games of the future. As trite as it may be for me to say that I am extremely pleased and excited about this deal, I am.”

The privately-held Zenimax is the parent company of Bethesda Softworks, the studio behind the Elder Scrolls series of games, Fallout 3 and the upcoming Brink. “Our intention is to make sure id Software will continue to do what they do best – make AAA games,” said ZeniMax CEO Robert Altman. “Our role will be to provide publisher support through Bethesda Softworks and give id Software the resources it needs to grow and expand.”

According to the press release, no operational changes will be made at id and all principal employees have signed long-term contracts to maintain their roles in the studio. id is currently working on Rage, a new FPS currently scheduled for release sometime in 2010.

I’ll bet you didn’t see that one coming, did you?

UPDATE: id co-founder John Romero, who earned fame as the designer of Wolfenstein 3D, Doom and Quake before leaving the company to found the ill-fated studio Ion Storm, was less than enthusiastic about the sale of the company.