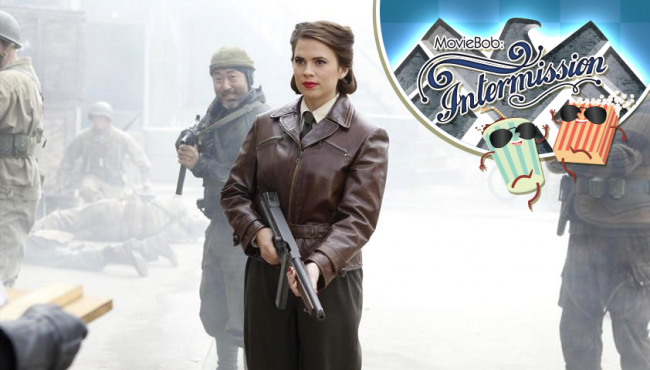 We don’t yet know just who will make an appearance in Agent Carter, but we can speculate.

Next week will see the debut of Agents of S.H.I.E.L.D.’s prequel/sister-series, Agent Carter. The series follows the exploits of Haley Atwell’s Peggy Carter as she moves on from the “death” (as far as she knows) of Captain America and grapples with the less-than-equal treatment of women in postwar America, while also aiding Howard Stark and his butler Jarvis (the original human incarnation of Iron Man’s personal A.I. buddy) keep stolen super-technology out of enemy hands.

It’s an exciting series conceptually, as it involves yet another Marvel character that might never have been considered leading material getting a prime-time shot thanks to their reception in the Cinematic Universe — in this case, an entire series built on the enormously positive reception for Haley Atwell’s turn as Peggy in Captain America: The First Avenger. But it also promises to explore a fascinating, often-overlooked moment in American history: where homefront women who had seen their social and workforce standing rise rapidly during World War II saw their newfound positions yanked away as The Men came back from fighting. The anger at (and resistance to) this “back to the kitchen” mentality among many women is often cited as the spark that led to the 50s and 60s “Women’s Liberation” movement.

But it also looks primed to delve deeper into a slice of Marvel continuity that the Cinematic Universe has thus far only touched on in First Avenger: The so-called “Golden Age” of comics, roughly encompassing the 1930s to the 1950s but particularly the original height of the superhero genre during WWII. Marvel has an unusual relationship to the era, in that they weren’t Marvel at the time (they were called “Timely Comics”) and apart from Captain America and Namor their books generally ranked well behind DC’s pantheon of heavy-hitters and Fawcett’s then-dominant Captain Marvel (“Shazam”) franchise. Timely/Marvel’s stable included a vast array of largely obscure costumed-adventurers, mostly-forgotten today save for instances where modern Marvel writers have brought them back or tied them into the history of modern heroes (see also: Books like “The Invaders” or “Sgt. Fury’s Howling Commandos,” which were set in WWII/Timely continuity but written in the 60s and 70s).

These mostly-forgotten Marvel icons can probably never hope to get movies or series of their own, but could they turn up in the world of Agent Carter, which is taking place right in the middle of their career peaks? Maybe — especially if the miniseries is successful enough to inspire production of more Peggy-centric adventures. Here’s a quick rundown of characters who could conceivably turn up should Marvel deem it possible:

MISS AMERICA
Struck by lightning while hanging around her scientist father’s lighthouse laboratory, Madeline Joyce was imbued with… well, Superman’s power-set, basically. Donning the mantle of Miss America, she flew to the battlefields of WWII to aid fellow heroes like Captain America against the Axis threat. Given Carter’s early-feminist ass-kicker setup, if she’s going to meet superheroes it’d make sense for one of them to be women.

Of note: At various points in modern Marvel continuity, she’s been described as a possible mutant whose latent abilities were “activated” by the lightning, which isn’t how mutation works in current canon but is similar to the way Inhumans have discovered their powers in Agents of S.H.I.E.L.D. She was also the first person identified as the biological mother of Quicksilver and Scarlet Witch before their parentage was retconned to Magneto and a Romani woman in 1983 — a change that has recently been undone.

THE WHIZZER
Yes. Whizzer has the stupidest name in superhero history, and it’s not helped by his being Timely’s nakedly-obvious ripoff of The Flash. Also not helping: He gets his powers (superhuman speed) from having been injected with the blood of a mongoose in order to cure him of a snakebite. On the other hand? Speedsters are big right now — hell, people even seemed to like that goofy disco-brat version of Quicksilver in X-Men: Days of Future Past.

Okay, so Whizzer is lame. You’re right to think so. But one person who didn’t find him lame was Miss America (see previous) who became his lover during the war and his wife afterwards. As you may have gathered, he was the hero at point believed to have fathered Quicksilver and Scarlet Witch before Magneto was (now erroneously) identified as their father.

HUMAN TORCH (JIM HAMMOND)
We’ve been over this guy a few times, but for the newbies: The Fantastic Four’s Human Torch was named in honor of a Golden Age hero named Jim Hammond, an “artificial human” android abandoned by his creator Phineas Horton when it was discovered that Hammond’s “skin” became engulfed in flames when he was exposed to oxygen. He and Namor were enemies for a time, but put their differences aside when both opted to join the Allied war-effort against the Nazis. As you may or may not recall, he’s one of two characters on this list who’ve already appeared in the MCU — his body is on display (in its oxygen-proof chamber) at the Stark Expo in the first Captain America.

Of (possible) note, Hammond had two sidekicks in the Golden Age: Toro, a teenaged boy, and Mary Mitchell, aka Sun Girl.

GOLDEN GIRL
Betsy Ross (real name Elizabeth, changed to be more patriotic) was an American agent (and contemporary of Peggy Carter’s) assigned to the Captain American program during WWII. She later donned a costumed identity of her own to help Cap’s various replacements (see later entries) as the war wound down. Of interest to MCU continuity: She’s the aunt of General Thaddeus “Thunderbolt” Ross, the nemesis of The Incredible Hulk (and thus the grand-aunt of Hulk love-interest Betty Ross).

NAMOR: THE SUB-MARINER
There’s actually some question remaining as to whether or not Namor (the half-human/half-Atlantean prince of an undersea kingdom granted superhuman powers via mutation as result of his interspecies parentage) is or isn’t the last Marvel character whose movie rights are owned by another studio, in this case Universal. But if they aren’t, his history does place him as active and about in this period.

NICK FURY
Confused? Well, I’d like to say I can fix that. But…

Here’s the thing… The Cinematic Universe version of Nick Fury is an amalgam: He acts/operates more like the “mainstream” 616 version but has the face and mannerisms of his Ultimate Universe counterpart. But here’s the kicker: We’ve never learned how old the MCU Nick Fury is supposed to be, and that’s very interesting considering that both men are artificially age-resistant and long-lived enough to have served in World War II.

“Classic” Fury was the leader of the Howling Commandos in WWII-set books written in the 60s, but brought to the present sans-aging and reborn as James Bond-esque to meet fan demands. Ultimate Fury, on the other hand, appears deceptively young due to having been experimented on by his own government. So it’s not at all outside the realm of possibility for Samuel L. Jackson to come swaggering through Agent Carter. (Try to look surprised all the same, though.)

BLONDE PHANTOM
Blonde Phantom was a detective’s assistant turned WWII-era O.S.S. spy. Interestingly, though a minor figure in the Golden Age, she became a notable supporting character in modernity. As an older widow in the 1980s, she was a romantic partner of Morris Walters, father of Jennifer “She-Hulk” Walters, and has offered spy expertise/experience to her and other heroes to this day.

Originally, Marvel/Timely continued publishing Captain America stories well into the 1950s, rebranding their idealistic WWII hero as the more politically-strident “Captain America: Commie-Smasher.” This continuation was unpopular with writers and ignored by the public at large, and when Marvel decided (reputedly at the personal insistence of Stan Lee himself) to resurrect Cap in the then-current 1960s continuity as an Avenger, it was decided that they’d ignore the 1950s “Commie-Smasher” stories entirely and retcon Steve Rogers as having been frozen since the war after the doomed mission that also resulted in the “death” of Bucky Barnes (which in turn became an in-universe excuse for Marvel heroes to eschew teenaged-sidekicks).

But since “new” fans eventually rediscovered the 50s stories, a new backstory was created: A mentally-unstable, patriotism-obsessed hardcase named William Burnside was conscripted to become the new Captain America in Rogers’ absence. This turned out to be a really, really bad idea, as Burnside went crazy(er) — changing his name to Steve Rogers, getting plastic-surgery to resemble the original and taking out his nationalistic-rage on innocent civilians. He was eventually warehoused, Ark of the Covenant-style, but has returned as a villain (he’s an oldschool-racist and fixated on “restoring” Traditional America, is the usual idea) numerous times.

If Agent Carter were to hypothetically get further adventures spanning into the 1950s, how is this guy — a hyper-patriarchal nutjob who desecrates the uniform, name and memory of Peggy’s lost love — not the perfect nemesis?

THE WINTER SOLDIER
Oh yeah! Someone else familiar who’s technically still alive in this period.

Remember: The “idea” of Winter Soldier is that HYDRA and various other ne’er-do-wells just keep freezing and thawing the cyborg-enhanced Bucky Barnes every time they need him to assassinate someone, so he’s been active taking out prime targets for decades between WWII and now.

And hey… during Arnim Zola’s big info-dump in Captain America: The Winter Soldier, it’s implied that HYDRA was responsible for the murders of Howard Stark and his wife, right? Hm. Y’know, if the trigger-man on that was Bucky Barnes, and Iron Man was to find out about that, he’d probably want to kill him for it. And if Captain America was to object to that? Like, say, on the grounds that he was under mind-control at the time and not responsible? That sure would give them something to fight about in Civil War…

BLUE BLADE
…Oh fine, I want to see them try and pull off that costume, okay?