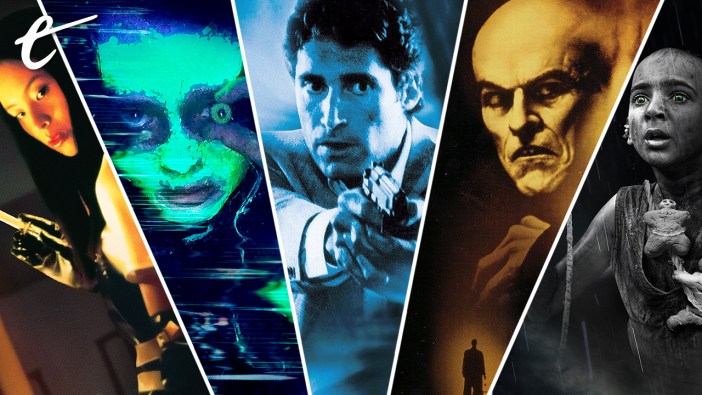 Halloween is almost upon us, and it seems like the perfect opportunity to watch a scary movie. Nick asked me to throw together a list of horror movies that I feel are somewhat underseen. We don’t normally do lists here at The Escapist, being understandably wary of listicles as “content.” However, horror movie recommendations seemed like something that might be of interest to our readers. So I began drafting a list of potential candidates. That’s what you see below.

Before jumping into the list, it’s worth briefly unpacking the logic behind it. Horror is a diverse genre with a long history and a variety of forms. Ideally, any list of horror movies should capture the genre’s versatility. The goal was to create a selection that captured a wide swathe of horror, one that included genre hybrids, international films, and movies from across cinema’s history.

The goal was also perhaps to point readers towards films that they hadn’t seen or had missed. As such, it skips over the major horror franchises. With a couple of exceptions, it largely avoids established mainstream directors. With a bit of luck, there should be something on this list for every horror fan, from an Indian horror musical to 1980s schlock to modern internet horror. Enjoy.

Audition was part of the wave of Japanese horror that exploded at the turn of the millennium, including modern classics like Ringu, Kairo, and Ju-On: The Grudge. However, Takashi Miike’s adaptation of Ryu Murakami’s novel is notable as the rare film in that wave yet to receive a major Hollywood adaptation, although it has not been for lack of trying.

Although, it’s easy to understand why Hollywood has struggled with Audition. It is a strange and unusual film with its unique rhythms. It begins as something akin to a quirky romantic comedy, with movie producer Yasuhisa Yoshikawa (Jun Kunimura) concocting an elaborate plan to find a new wife for widower Shigeharu Aoyama (Ryo Ishibashi): They’ll do a casting call for a fake movie.

The process turns up a young actor named Asami Yamazaki (Eihi Shiina), and Shigeharu quickly strikes up a relationship with her. However, digging into her references, Yasuhisa discovers that Asami is not who she claims to be.

Available to stream at Kanopy, Tubi, Fandor, and Arrow. 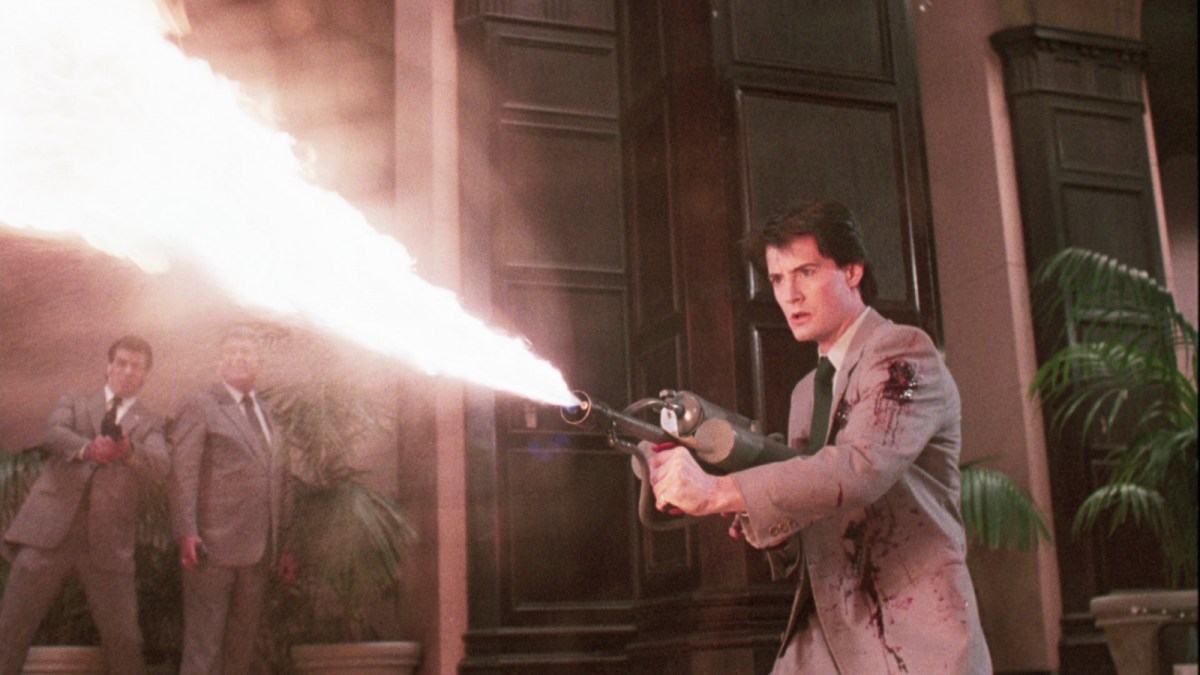 Detective Thomas Beck (Michael Nouri) has been investigating a series of mysterious crime sprees in Los Angeles. In each case, a seemingly normal person has become a ruthless psychopath with a taste for Ferraris. There is no discernible link between the offenders and no tangible motive for the crimes. It seems that hedonism has become contagious in the City of Angels.

Beck finds himself partnered with Agent Lloyd Gallagher (Kyle MacLachlan), a special agent from out of town who claims to possess a unique insight into the case. Beck and Gallagher find themselves at odds, with Beck becoming increasingly suspicious of his strange young partner, but the body count is rising and time may be running out.

The Hidden is pure 1980s schlock, a committed piece of science fiction horror that is notable for what feels like Kyle MacLachlan giving a rehearsal performance for the work he’d do on Twin Peaks and for one of the most assured deployments of Chekhov’s Flamethrower this side of Once Upon a Time… in Hollywood.

Available to stream at Criterion.

It has become customary to complain about how Netflix handles its ever-growing library. The streaming service produces and purchases so much content that anything not attached to a major franchise or receiving a major push from the service can just be completely submerged in the glut of film and television shows.

Remi Weekes’ His House is a case in point. This small and intimate British horror is a tightly constructed haunted house tale that follows Sudanese refugees Bol (Sope Dirisu) and Rial (Wunmi Mosaku) as they try to find a new life in the United Kingdom. They are provided with a dilapidated council house, but they quickly discover that ghosts can travel with them.

His House is a captivating and unsettling feature film debut from Weekes, one that manages to blend evocative imagery with compelling character studies without sacrificing any scares. The film receives bonus points for casting Matt Smith in a supporting role as one of his trademark entitled assholes.

Available to stream at Netflix, His House is scheduled to leave Netflix on October 29. 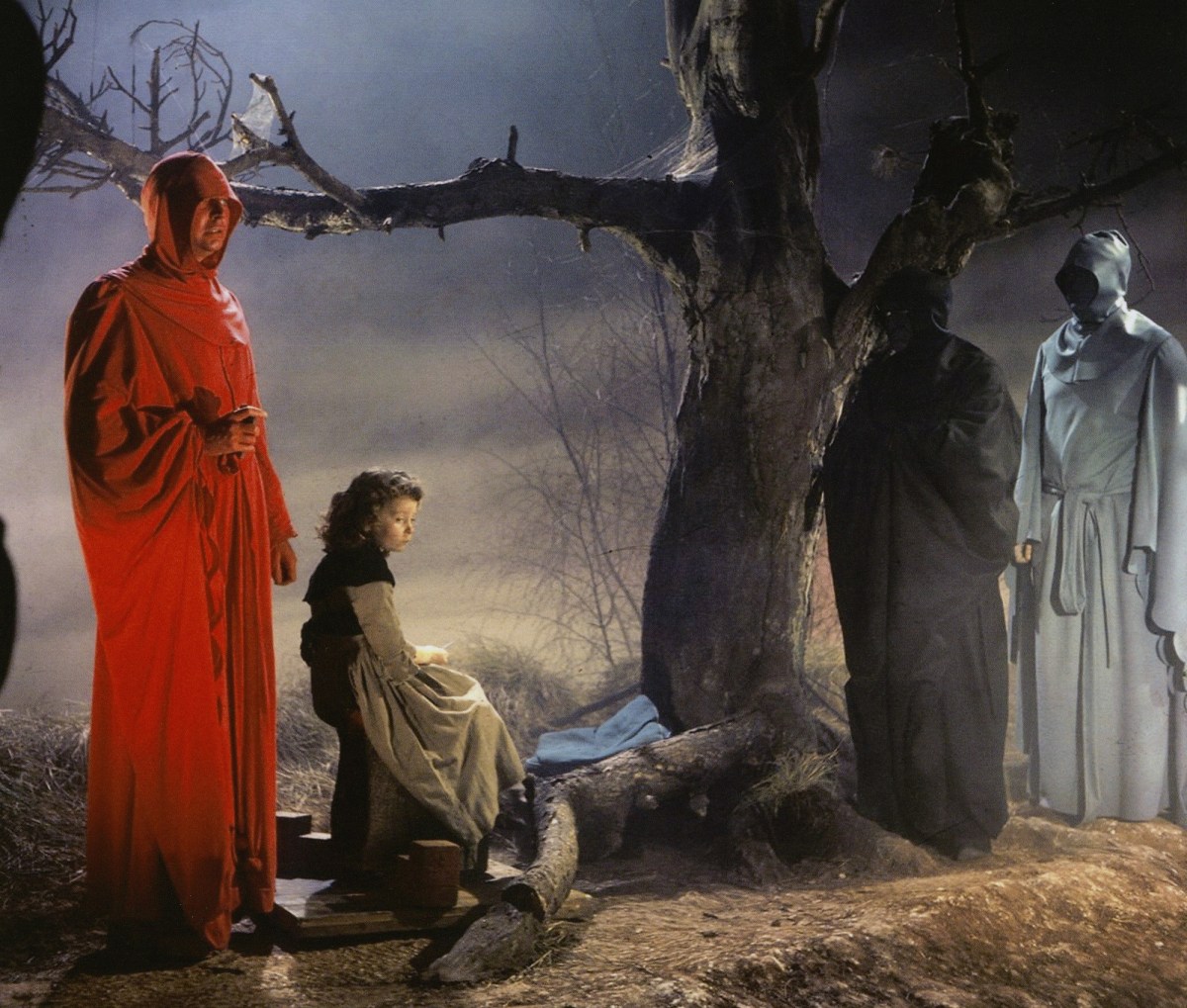 Roger Corman produced so many of these horror movies that it can be easy to forget Corman’s influence on American cinema. Corman was the producer who gave directors like Francis Ford Coppola and Peter Bogdanovich their starts. However, he was also an accomplished filmmaker in his own right.

Corman produced a number of (extremely) loose adaptations of Edgar Allan Poe stories, starring Vincent Price. Those going in expecting textual fidelity will undoubtedly leave disappointed. However, those who watch the movies looking for classic production values and rich studio-bound atmosphere will be in for a treat.

The Masque of the Red Death was recently remastered by Martin Scorsese’s Film Foundation and looks absolutely gorgeous. It’s rich and saturated, filled with striking imagery and vivid colors. These old-fashioned horror movies are not for everybody, but if you want to try something a bit more classical than most of the films on this list, you could do worse.

Available to rent or buy from Apple, Amazon, VUDU, etc.

There is perhaps a cheap joke to be made about the current state of the Marvel Cinematic Universe here, but Phase IV is notable as the only feature-length film directed by Saul Bass. Bass is one of the most influential figures in the history of cinema, having worked as a graphic designer for directors like Alfred Hitchcock, Martin Scorsese, and Stanley Kubrick.

Phase IV demonstrates Bass’ keen eye. It’s a film built around an absurd premise that feels like it could have been lifted from a 1950s B-movie, as a strange cosmic phenomenon begins to affect the behavior of ants. Narratively, there’s little of note about Phase IV. The plot was reportedly cooked up over cocktails, and Bass’ original ending was cut before it was released.

However, as one might expect given the film’s pedigree, Phase IV is absolutely beautiful to look at. It’s rich with atmosphere and a mounting sense of dread, bordering on a surrealist nightmare.

Available to rent or buy from Apple, Amazon, VUDU, etc. 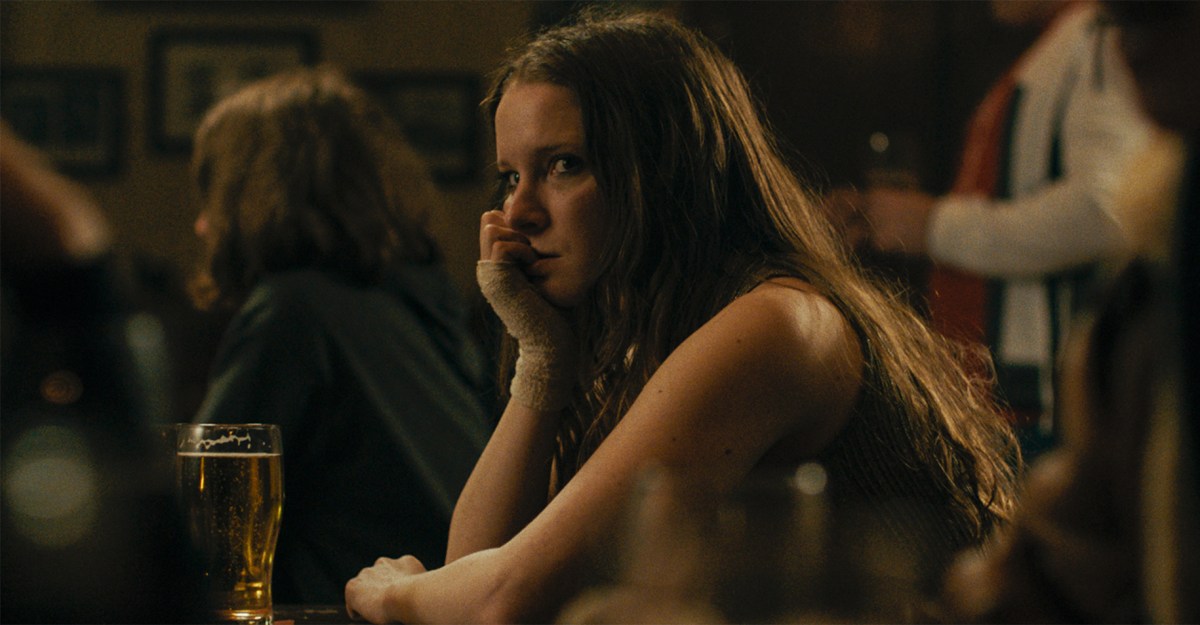 Saint Maud feels like the modern film on this list closest to a breakout success, in large part because the movie serves as a star vehicle for Morfydd Clark. Before Clark was cast in The Lord of the Rings: The Rings of Power, it was her tremendous performance as the title character in Saint Maud that put her on the map for horror audiences.

Writer and director Rose Glass constructs an unsettling psychological horror about a nurse named Katie who turns to religion after a horrendous experience while on duty. Adopting the name Maud, the young woman becomes a private palliative care nurse. She finds herself looking after an aging dancer named Amanda (Jennifer Ehle), who openly mocks Maud’s religious devotion.

Maud decides that she is going to save Amanda, whether Amanda wants it or not. What follows is a gripping and unsettling horror that applies the language of the classic exorcism horror to something decidedly more personal.

Shadow of the Vampire is an interesting and weird genre hybrid. It is an obvious love letter to one of the earliest horror movies ever made. It is a pitch black comedy about a director trying to wrest control of his movie from his vampire star. It is a strangely touching meditation on history and memory, as the eponymous vampire achieves true immortality.

Indeed, Shadow of the Vampire returns time and again to the parallel between the vampire and the camera; both take something resembling life from their subjects and grant immortality in return.

Ironically for a movie about the immortality of film, Shadow of the Vampire is not available online. You’ll have to find a physical copy. 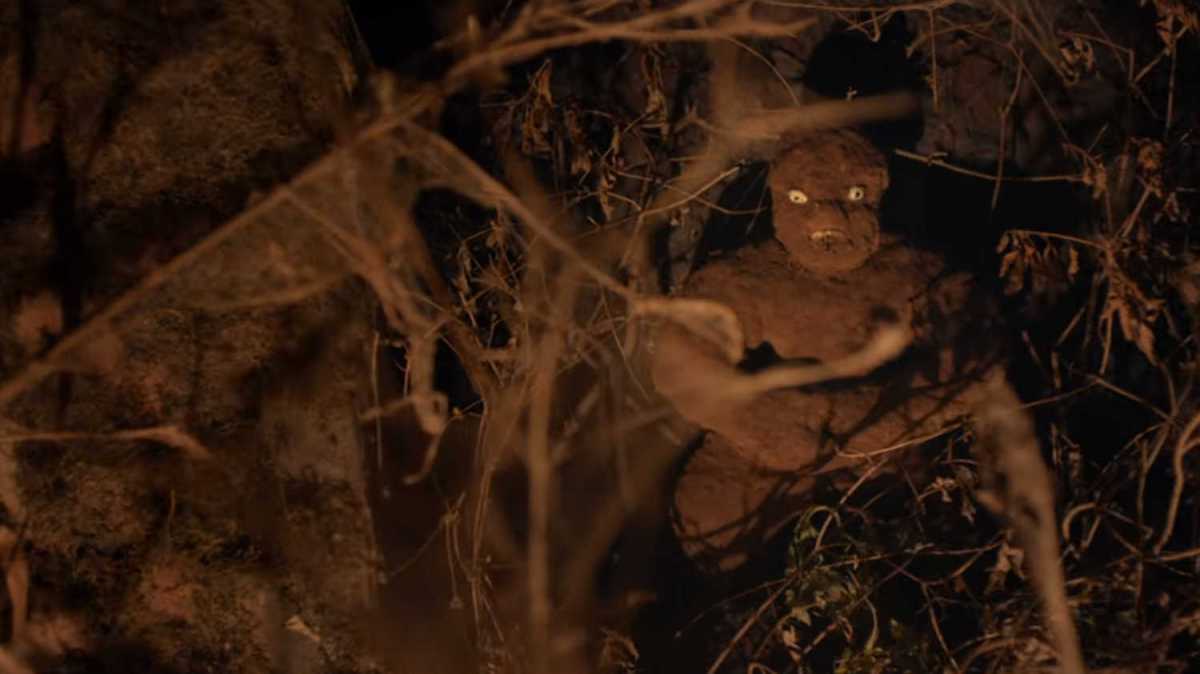 The breakout success of RRR earlier this year has sparked international interest in Indian cinema. It is perhaps reductive to talk about Indian cinema as if it is a single entity, instead of several distinct industries that overlap and coexist, but there is no denying that the country’s cinematic output has a distinct aesthetic when compared to American or European film.

Tumbbad is a fascinating synthesis of western horror conventions with the cinematic language of Hindi cinema. Drawing from the work of writer Narayan Dharap, director Rahi Anil Barve’s film was a labor of love. The movie had a complicated development cycle, including a number of false starts going back to 2008, three years of production, and another two and a half in post.

However, the result is a truly singular fusion of styles and influences. A tale of greed and class unfolding against the backdrop of Indian Independence, there’s nothing quite like Tumbbad.

Internet horrors are tough, in large part because films tend to be made by older people and the internet tends to be used by younger people. Horror movies about the internet, from FeardotCom to Untraceable, can often feel like two hours of watching an old person shake their fist at a cloud. This is what makes We’re All Going to the World’s Fair so compelling.

Writer and director Jane Schoenbrun builds her movie around a lonely young girl named Casey (Anna Cobb), who is participating in a viral online challenge built around the titular phrase. The idea is that the person doing the challenge repeats the phrase three times, smears blood on the camera, watches a mysterious video, and then notices any strange changes that might be occurring.

Shot on a low budget and with an intensely subjective perspective, We’re All Going to the World’s Fair is built around a variety of competing ambiguities. Is something really happening to Casey? Is Casey herself making it happen? Is any of this real? It’s the perfect horror for the internet age.

Available to stream at HBO Max. 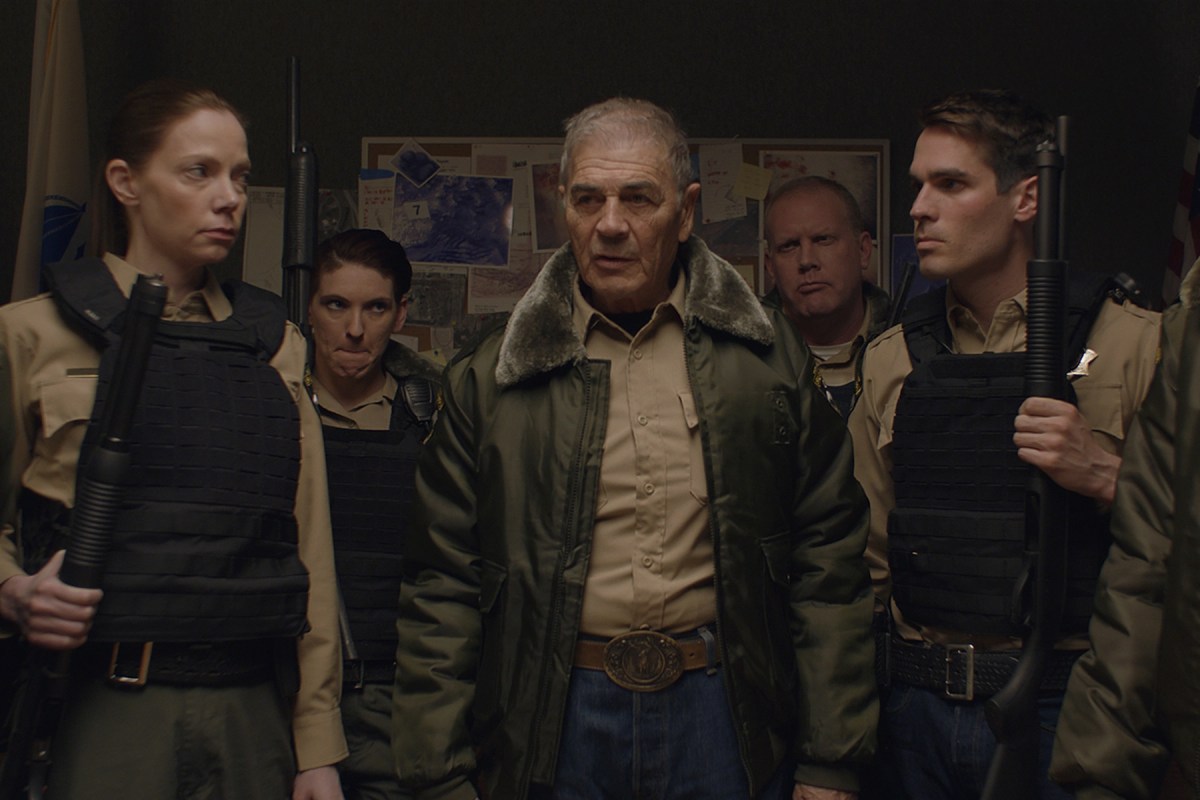 Cummings casts himself as Deputy Sheriff John Marshall, a divorced recovering alcoholic. A series of gruesome attacks disrupt the peaceful community of Snow Hollow, throwing Marshall’s personal emergencies into sharp relief. Residents grow increasingly unnerved as mounting evidence points to an animalistic serial killer. This could be Marshall’s chance to prove himself — if he does it right.

The Wolf of Snow Hollow is a fascinating cocktail of a movie, blending Cummings’ black comedy with the framework of a classic monster movie, while drawing overtly from The Silence of the Lambs. It’s a movie worth sinking your teeth into. 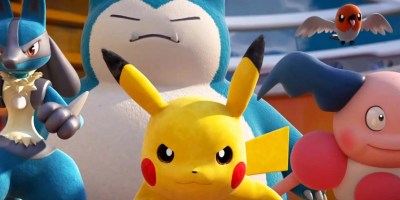