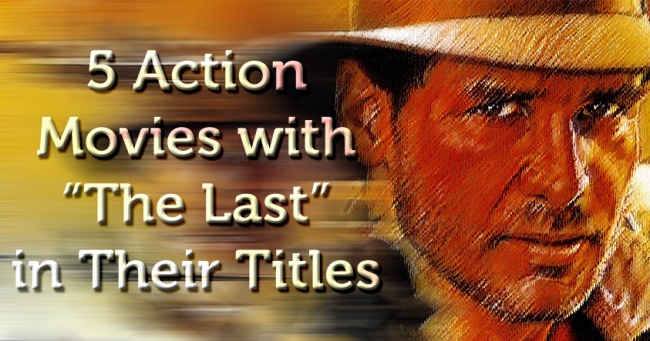 We now know that “The Last Jedi” will be the subtitle of the next Star Wars movie. Personal speculation? Jedi is plural and it’s referring to a bunch of people. Regardless of how you feel about the title, it’s not the most original thing out there. In fact, there have been a great number of movies to include “The Last” in the title. So many that making a list of all of them would have been impossible. Instead, here’s one of just action movies – and there are still some that weren’t included.

Indiana Jones and the Last Crusade

I know I might alienate some people right off the bat by saying that Indiana Jones and the Last Crusade is my personal favorite of the Indiana Jones movies, but that’s the truth. For me, it has the best mixture of action, humor, and story, all coming together in perfect harmony. It’s such a wonderful conclusion to what is quite a great trilogy (even Temple of Doom isn’t bad), and it sure is a great thing that they never considered making any more of these, letting the trilogy stand on its own.

Indiana Jones and the Last Crusade makes the list due to its Lucasfilm connection.

With a new “white guy saves Asian people” movie coming out next month with The Great Wall, it’s about time that The Last Samurai reentered the public consciousness. Tom Cruise starred in a movie about a Civil War veteran who connected with the Samurai in Japan and eventually led them into war in order to protect their culture. It’s pretty fun, contains one of the better Tom Cruise performances, and is well worth your time.

It’ll also be the last good movie on this list.

Ah, the point at which the X-Men franchise began to go downhill. X-Men: The Last Stand was the first movie without Bryan Singer at the helm, and boy did it miss him. Say what you will about Singer and his approach to the franchise, but at least it made for mostly entertaining movies – until the last one, that is. The Last Stand is messy, kind of boring, has plot issues, and feels kind of meaningless, really. It takes a long time to set up this big battle, but then the big battle isn’t worth it.

At least it’s not the worst X-Men film.

As we all talk about Split opening this past weekend, it’s worth remembering that M. Night Shyamalan directed an Avatar: The Last Airbender movie. It’s so, so, so bad. It spent most of the movie trying to explain itself, leaving almost no time for the stuff you want to see. The acting is bad, the story is almost nonexistent, the characters … what characters? About the only thing it had going for it are its visuals, and I’m not even sure those hold up. I mean, it wasn’t After Earth bad, but it’s pretty close.

When Vin Diesel movies work, they’re a lot of fun. When they don’t, they’re pretty awful. The Last Witch Hunter is one of those. Diesel got a movie made based on his Dungeons & Dragons character – seriously! – and in doing so wound up making one of the most forgettable movies of 2015. It’s almost wall-to-wall CGI overloaded action, none of which is even remotely entertaining. And it takes itself so insufferably seriously that you just want to punch it.

There are countless more movies with “The Last” in the title. What are some of your favorites? Least favorites?

Credit to Nick Monroe for the idea for this list.