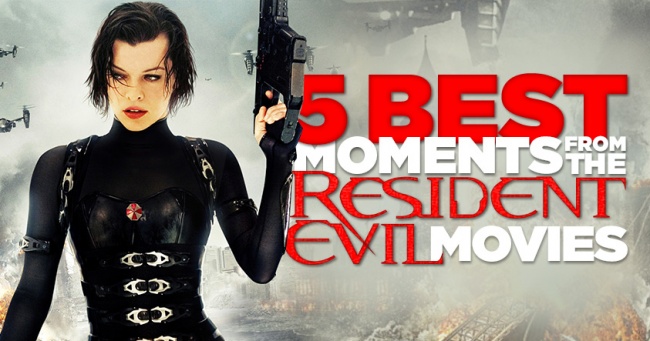 The longest-running live-action movie franchise based on videogames, the Resident Evil movies will have managed to survive critical and audience disdain for a decade and a half by the time its sixth entry, currently subtitled The Final Chapter, is released. Yes, it was all the way back in 2002 that Paul W.S. Anderson and now-wife Milla Jovovich began making movies that less and less had anything to do with the videogames, and to date have grossed almost a billion dollars worldwide. They started as horror movies and have since transitioned into almost pure action films. As such, even if the films, on the whole, haven’t been great – and I’m saying that as someone who likes them – there have been some standout moments scattered throughout. Since it’s Resident Evil Appreciation Week here on The Escapist, in honor of the game series’ 20th anniversary, let’s celebrate some of the best moments from the live-action Resident Evil movie franchise.

Spoilers follow. One scene per movie. Images may not relate to scene described.

#1: The Infected Have Escaped (Resident Evil)

The majority of Resident Evil takes place several stories beneath the surface of the Earth, features a select group of people, and seems to be an isolated incident. Most people don’t make it out, but Alice (Jovovich) does – only to be captured by Umbrella Corporation scientists. She awakens later, disoriented, and unaware of what happened. After getting into the streets, which are empty and very much in post-apocalypse mode, it becomes apparent that the T-virus escaped the Hive and that the city is now in full-on totally-not-zombie mode. It’s the franchise’s Statue of Liberty moment, only instead of sentient apes running the planet, social order has fallen by the wayside, most of humanity finds itself wiped out, and totally-not-zombies are now the group with the largest population. Or, that’s what would happen soon.

One of the biggest – and, at times, only – connections between the Resident Evil movies and their videogame counterparts have been the transplantation of the game characters to the movies. Apocalypse had two of them: Carlos Olivera (Oded Fehr) and Jill Valentine (Sienna Guillory). Jill’s introduction showed us how she was following the developing totally-not-zombie breakout in Racoon City, and then had her almost immediately assert her domination as she enters the police station, guns blazing. It’s like a superhero intro scene, and established her as someone to take seriously right off the bat. Jill wound up being a great character in this film, and played a pivotal role in the fifth one.

Resident Evil: Extinction was a pretty big film for Alice as a character. Not only did she gain psychic powers – because why not? – but it was also revealed that The Umbrella Corporation was cloning her. Her blood also contains the cure for the T-virus. She is a picture-perfect example of The Special. And yet, seeing her at the end, looking out at a significant number of pods containing her clones – that was a teaser. Could we see dozens of Alice clones against tons of totally-not-zombies? It was a big moment, framed extremely well, and more intriguing than almost anything else in the film – even Alice’s psychic powers. It ultimately didn’t go anywhere, but if you’re watching the films in order, it can’t help but get you pumped.

You know, it’s odd. When Pyramid Head shows up in the Silent Hill movies, I scoff. When Executioner Majini showed up in Resident Evil: Afterlife, I cheered. Maybe it’s hypocritical, or maybe it’s because Executioner Majini – referred to as “The Axeman” – gets a pretty fun fight against Alice and Claire Redfield (Ali Larter). It was the first of the series to be shot in 3D, it’s filled with slow motion, and it’s campy as can be, but boy is it fun. And, from a cinematography and editing perspective, it’s pretty good. Realistically, though, you could do a whole list based just on the best moments of Afterlife. As far as I’m concerned, it remains the top film of the series.

Resident Evil: Retribution was a convoluted mess used, effectively, to perform a greatest hits version of the previous four films. The group gets placed inside a simulation from various parts of the world and featuring a whole bunch of enemies from earlier films – all while being chased by evil clones of characters we’ve seen before. The Moscow simulation featured both Las Plagas Undead and giant Lickers. It’s probably the longest of the simulations, and it’s one of the most action-packed. This had a good number of standout moments, too – the opening sequence, the final shot, the New York simulation, and any of the older characters returning as evil clones – but the Moscow one is the best as far as I’m concerned.

What have been your favorite moments of the Resident Evil movie franchise?