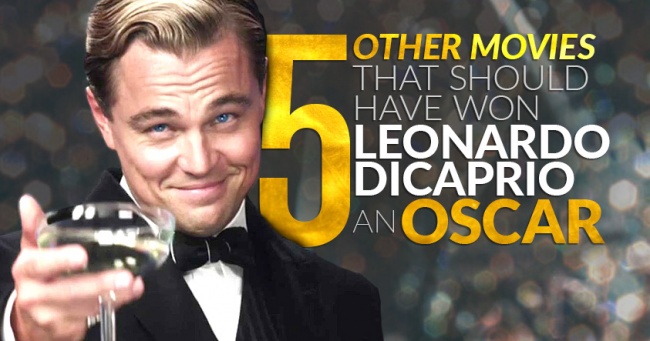 This past Sunday, Leonardo DiCaprio finally won an Academy Award. After five previous nominations, he got an Oscar for his grueling performance in The Revenant. In doing so, he ruined dozens of internet memes – the selfish guy. But those memes existed for a reason: many people believed that DiCaprio deserved an Oscar for one of his earlier roles, and that he’s been targeting Oscar-likely roles for a great deal of time now – almost his entire career. Today, we’re going to take a look at some of those performances.

Prior to The Departed, DiCaprio had teamed up with director Martin Scorsese two times. Both performances were really solid, but the best of the first three was The Departed. A remake of the Hong Kong film Infernal Affairs, the film saw DiCaprio act opposite the likes of Matt Damon, Jack Nicholson, Mark Wahlberg, Vera Farmiga, and Martin Sheen. He starred as Billy Costigan, an undercover police officer. The Departed wound up winning four Oscars, and had one acting nomination, but it was not for DiCaprio. While he wound up getting awards from various other organizations, the illustrious Oscar continued to elude him.

The same year as The Departed, DiCaprio also starred in Blood Diamond. Here, he plays a Rhodesian gunrunner named Danny Archer. The film was about diamonds mined in war zones that are sold to profit warlords, corruption, and diamond companies – at the cost of both the miners and the people living in these areas. It’s a message movie with a lot of action and a tremendous performance from DiCaprio – all the way down to his Rhodesian accent, which from most accounts was pretty accurate. The performance earned DiCaprio a Best Actor nomination at the 79th Academy Awards, but he ultimately lost out to Forest Whitaker in The Last King of Scotland.

A tender period-piece drama starring the star-crossed lovers of the Titanic themselves, Leonardo DiCaprio and Kate Winslet? Revolutionary Road seemed like it was made to clean up at the Oscars. And while the acting was great – both leads were nominated by several groups – it was only nominated for three Oscars, and the only acting nomination it got was for the perpetually underrated Michael Shannon. Now, part of the reason for this was likely that the film itself wasn’t the greatest, but great performances can transcend mediocre filmmaking. Revolutionary Road didn’t take home any Oscar gold, but DiCaprio easily could’ve been nominated and won.

Another message movie, Django Unchained saw DiCaprio playing against type as the villain, a slave owner named Calvin Candie? Well, how about that? If you think your audience is getting bored with you as the protagonist, how about changing things to an extreme degree by playing a racist slave owner? DiCaprio was electric, and every time he was on-screen he commanded our attention. But, much like before, he wasn’t even nominated. Christoph Waltz was Django‘s sole acting nominee, and while he eventually went on to win, it had to be a bittersweet moment for DiCaprio. As far as I’m concerned, this should have been his year.

#5 The Wolf of Wall Street

Once again teaming up with Martin Scorsese, DiCaprio starred in The Wolf of Wall Street, a three-hour look into the like of wealthy Wall Street stockbroker Jordan Belfort. The performance is a tour-de-force, having DiCaprio show dramatic depth, unnerving intensity, and hilarious physical comedy. He did receive a nomination for Best Actor, and was seen as one of the potential winners, but he eventually lost out to Matthew McConaughey in Dallas Buyers Club – an actor with whom he shared scenes in The Wolf of Wall Street.

DiCaprio, thus far, has had a tremendous career. What’s Eating Gilbert Grape, Catch Me if You Can, Gangs of New York, The Aviator, Shutter Island, and The Great Gatsby are all potentially worthy. There are probably even more! The point is, DiCaprio is one of our best actors, and it’s great to see a talented person get the biggest accolade he can in his profession.

What are your favorite performances from Leonardo DiCaprio’s career?